Who Cares about the Food? 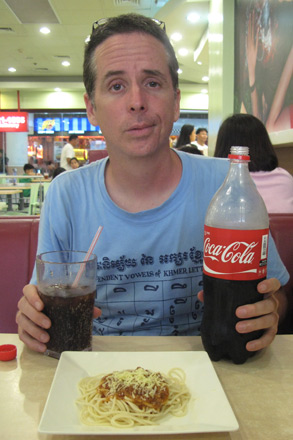 I’ve been debating how to broach this subject for some time. Hmmmm. Let me begin by saying I love Filipinos. They are amazing, warm, friendly, hospitable people…

But they can’t cook.

Many travelers claim that the food here in the Philippines is the worst in Asia. I wouldn’t go that far – in my book, that honor goes to another people I love: Tibetans. But when I recently heard that Obama’s White House chef was a Filipina, my first thought was, “God, I hope she did her training somewhere outside the Philippines.”

So what is Philippine cuisine? It might best be described as Oklahoma strip-mall meets crappy Hawaiian luau. Foot-long hotdogs, fish head on rice, cardboard pizza, stir-fried anything with pineapple and ketchup, greasy fried chicken, and elementary school cafeteria spaghetti are everyday favorites. In fact, bad spaghetti is a major player in the Filipino diet. It’s everywhere. It’s so common that McDonald’s, KFC, Pizza Hut, and even Mister Donut offer their own version of microwave spaghetti.

In fact, fast food chains, which reign supreme in the Philippines, seem to openly acknowledge the food issues here with meals designed to cater to Filipino tastes. To outsiders, these offerings occasionally seem so absurd that they appear to be mocking Filipinos, such as Pizza Hut’s Starpops Pizza which bills itself as “16 pullable sausage pops and pizza in one!”

Spam, corned-beef, canned tuna, and hotdogs (a.k.a “sausage pops”) are major food groups here and figure heavily in breakfast offerings. Tapsilog, a combination of corned beef, garlic-fried rice and eggs, is an ever-present early morning option. Or if you prefer, hotsilog made with hotdogs rather than corned beef. 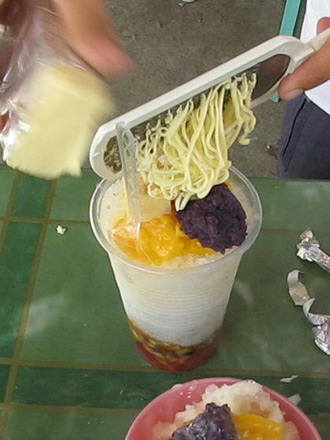 Then there is the unique Filipino use of cheese. Try a halo halo, shaved ice with mango, banana, taro, syrup, chunks of flan, condensed milk… and grated cheese. Not up your alley? How about waffles with maple syrup and cheese? Yummm. Or perhaps you would prefer a nice scoop of cheese-flavored ice cream. (Don’t believe me? Try it for yourself at the Inasal fast food chain. Just ask for a scoop of queso.)

Yes, taste is a highly subjective thing. Don’t even get me started on balut, boiled duck eggs with partially developed fetuses at the chewy center. Yum. And for your convenience, you can choose your preferred stage of embryonic development.

So is it all bad news? Absolutely not. The Bicol region of southern Luzon had some rather tasty dishes including Bicol Express, a mixture of pork, shrimp, garlic, and peppers. Coconut flavored ginataan dishes and the diced-pork candingga are also quite good. Outside of Bicol, larger cities and Boracay have nicer fusion restaurants which cater to wealthy Filipinos and Westerners. And lets not forget the wonderful Boracay Wet Market cooking services which can whip up a feast fit for a king. 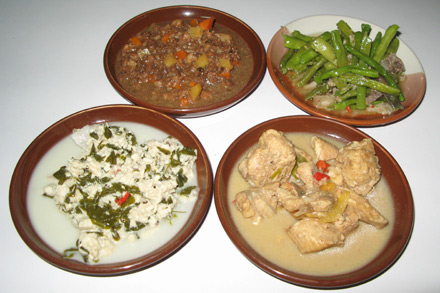 In the rest of the Philippines, standards such as sinigangs (tamarind sauce), adobos (vinegar/garlic sauce), afritadas (spicy tomato sauce) can be good if prepared by a reasonable cook. But all too often, the dishes are thrown together.

Actually, quality just might be the main reason that foreigners, including me, so frequently bitch about food in the Philippines. In fact, on one occasion it was so bad that I actually – just for one moment – considered throwing the food in the waiter’s face. Even the ubiquitous, beloved lechon (roast pig) seemed quite flavorless here. I mean seriously people, how can you make flavorless roast pig?

A second reason many visitors complain is that the food, which is mostly meats and starches, is often greasy, overcooked, and very sweet. (There is literally sugar in every dish – even Jollibee hamburgers!) Although fresh fruits and vegetables are widely available, they hardly ever seem to show up in the food. We have been in several restaurants which did not have a single vegetable option on the menu. And one restaurant we recently ate at listed spaghetti as its vegetable option (and no, it wasn’t vegetarian spaghetti).

To be fair, the food quality issues are largely linked to the good old U.S.A. A hundred years of American military and overzealous southern missionaries are bound to leave you with a diet of fatty meats, starches, and no vegetables. I, as an American, admit that I recognize that crappy spaghetti from K-12 cafeterias. And I willingly acknowledge that I appreciate the ubiquitous fast food restaurant and donut shops.

But, of course, amusing generalizations are just that, generalizations. In fact, we have found many exceptions to the sucky food rule. Elsa’s delicious chicken curry in Port Barton comes to mind. And we have happened upon many inexpensive family run eateries which were quite good. Some people are natural born cooks regardless of where they grow up. And with beautiful islands, steamy tropical breezes and epic sunsets, who cares about the food anyway? Or maybe I should say, other than Thomas, who cares about the food anyway?

51 responses to “Who Cares about the Food?”