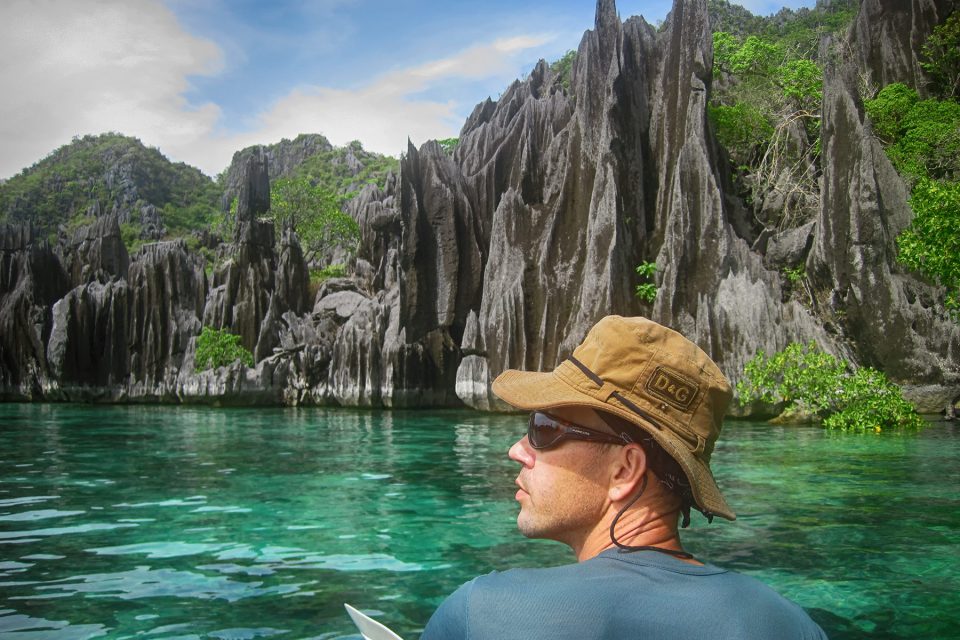 Sitting in our stilt house recovering from our spectacular wreck dives, the second major reason to visit the Philippine Island of Busuanga is clearly visible on the horizon. Dramatic and mysterious, Lonely Planet describes mystical Coron Island best when it says, “It wouldn’t be out of place in a King Kong film.”

Ominous walls of jungle-covered black karst erupt from the surrounding turquoise seas. Jagged and spectacular, Coron Island is the ultimate karst showpiece. As mountainous as Yangshuo, as labyrinthine as the Stone Forest, mid-ocean like Halong or Pang Nga, and as razor-edged as the spiky tsingy of Madagascar, Coron trumps them all. The place is pure magic. 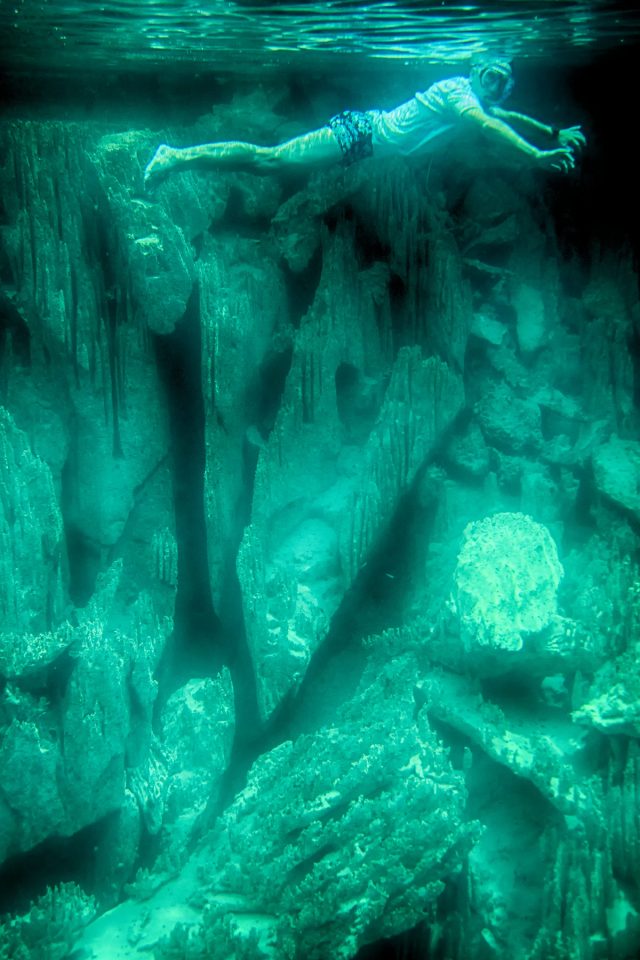 Controlled by the traditional Tagbanua tribe, most of the island is off-limits to outsiders. Luckily, the Tagbanua allow limited access to some of the highlights along the northwestern coast of the island including breath-taking Kayangan and Barracuda Lakes as well as Twin Lagoons.

All four bodies of water are steep-walled karst sinkholes filled with stunning glass-clear water, each one featuring unique creatures ranging from dwarf catfish to mini-pipefish to stingless jellyfish. Darwin would have been right at home here. Beyond that, the karst walls of the coast hide dozens of inlets filled with coral, fish, and many species of jellyfish which DO sting. It’s a cautious explorer’s paradise! 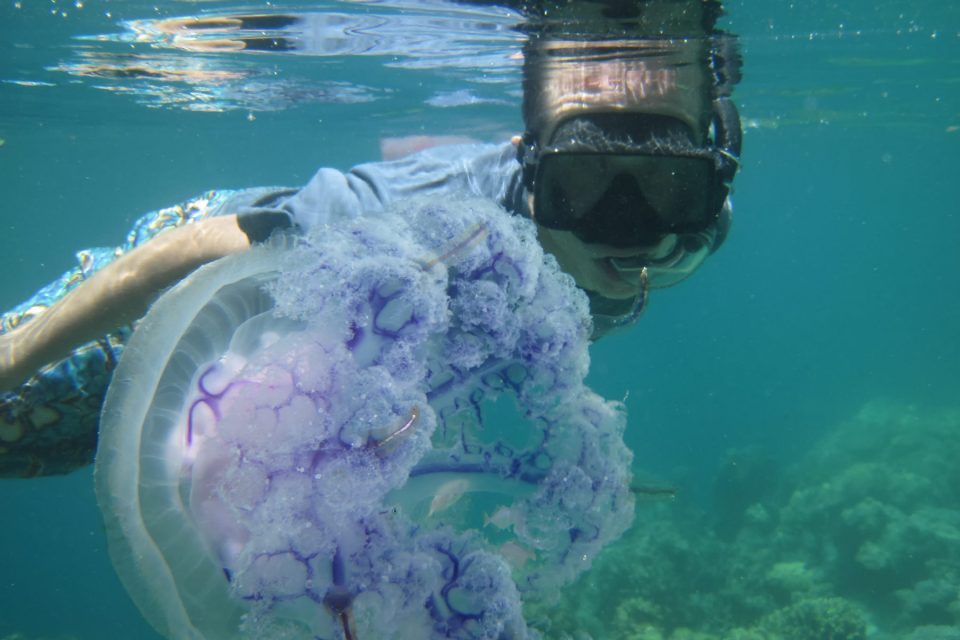 As if all that weren’t enough, massive Lake Cabugao, hidden deep within the karst peaks of the island’s interior, holds Coron’s most mysterious creature. Cabugao is said to be the lair of the giant octopus, a creature worshiped by the Tagbanua. Unfortunately, the holy lake is strictly off-limits to outsiders. (Come on people, are you trying to drive us crazy?) 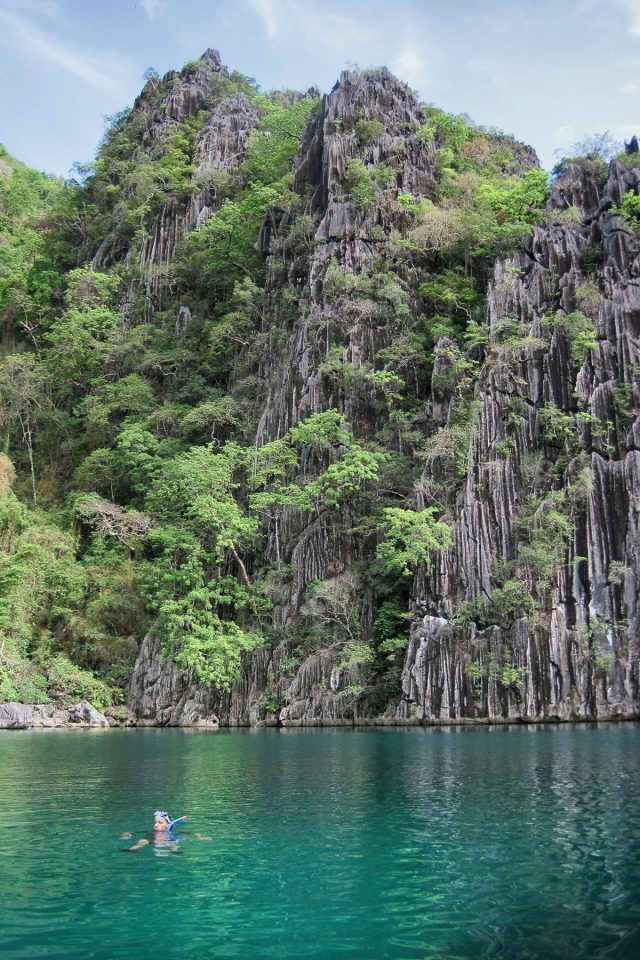 While we might not have been able to visit Lake Cabugao, we both made the most of the portions of the island open to us. Most tourists content themselves with lightening-paced motorized bangka tours which take in Coron Bay, a few of the lakes, a couple of beaches and some snorkeling. The Coron tours were enjoyable, but left us wanting more, so we decided to take it a step further and spend a couple of days exploring the jagged coastline by sea kayak. 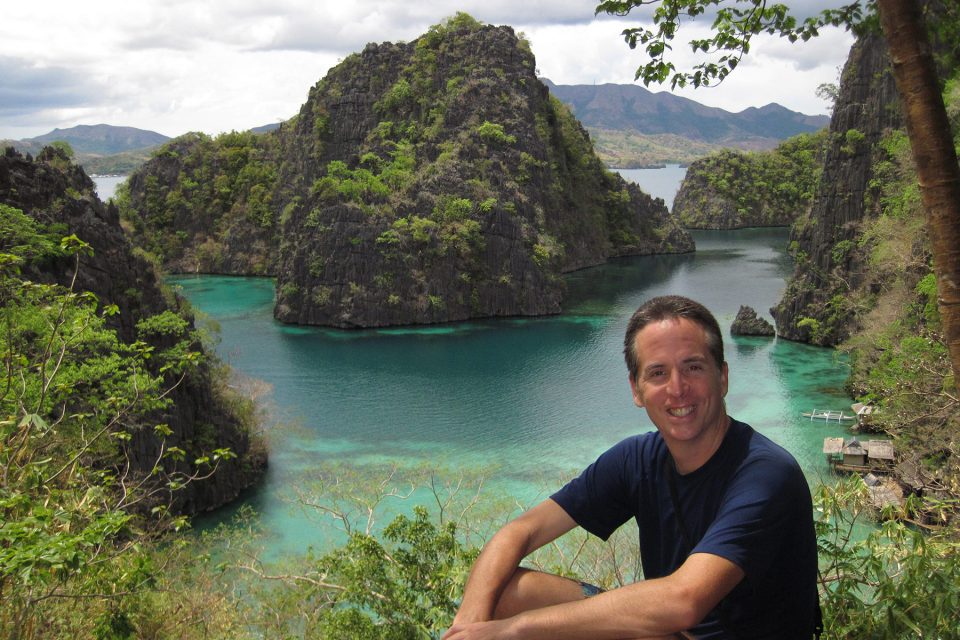 When we visited in 2010, sea kayaks could only be rented in Coron Town on Busuanga Island. At the time, Sea Dive Resort was renting doubles for 450 Pesos ($10) per day, but supply was very limited. The paddle from Coron Town to Coron Island should not be undertaken lightly. Strong currents can make paddling a challenge and rain storms can sweep through adding to the difficulty. 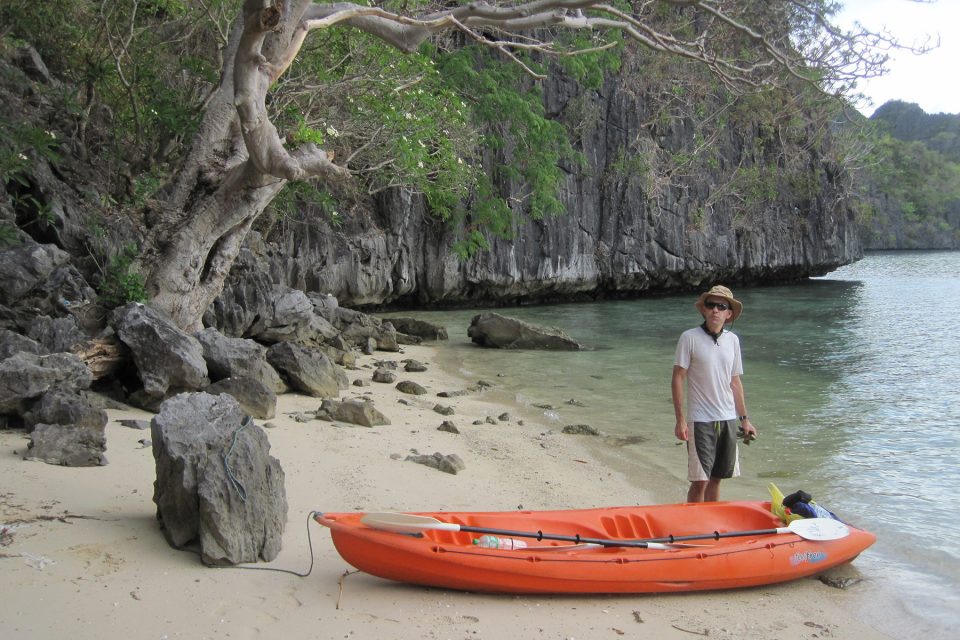 It takes around 60-90 minutes for reasonably fit paddlers to reach Coron Island. But paddlers are rewarded with mind-blowing karst formations, hidden lakes, crystalline coves, mangrove filled inlets, and tiny strips of white sand all backed by jungle-clad walls filled with crab-eating macaques and exotic birds. Yeah, it really is that beautiful. 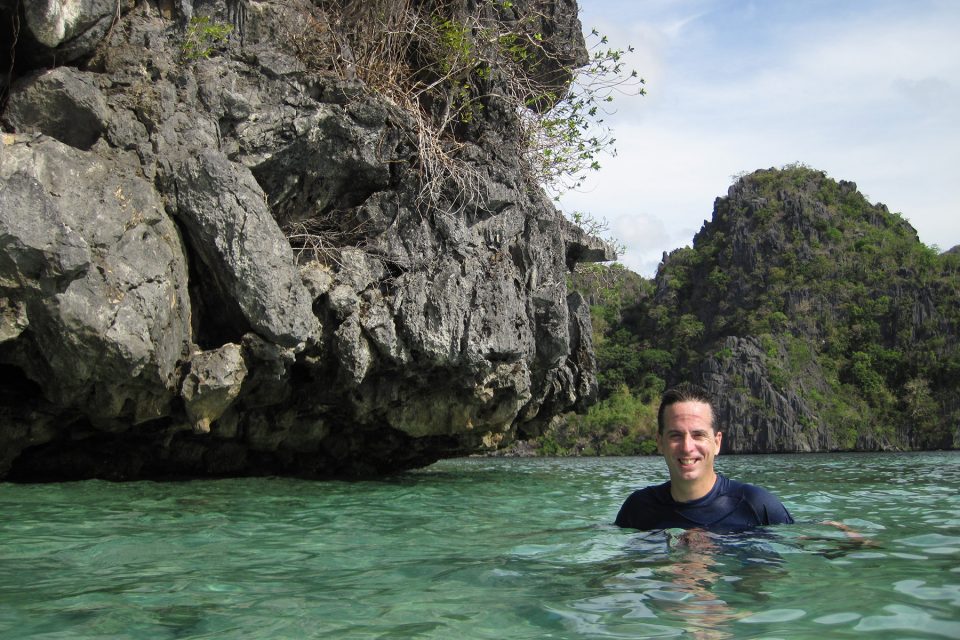 We spent two days floating in an out of various inlets and we had the place entirely to ourselves. When the daily bangka tours started, we just pulled back into a less accessible area and waited for them to pass. The surreal turquoise waters made for perfect swimming, although you really do need a mask and snorkel because pockets of dangerous jellyfish can provide for nasty (and painful) surprises. You’ll notice that in many of the pictures, we are wearing shirts while swimming to help protect from stings. 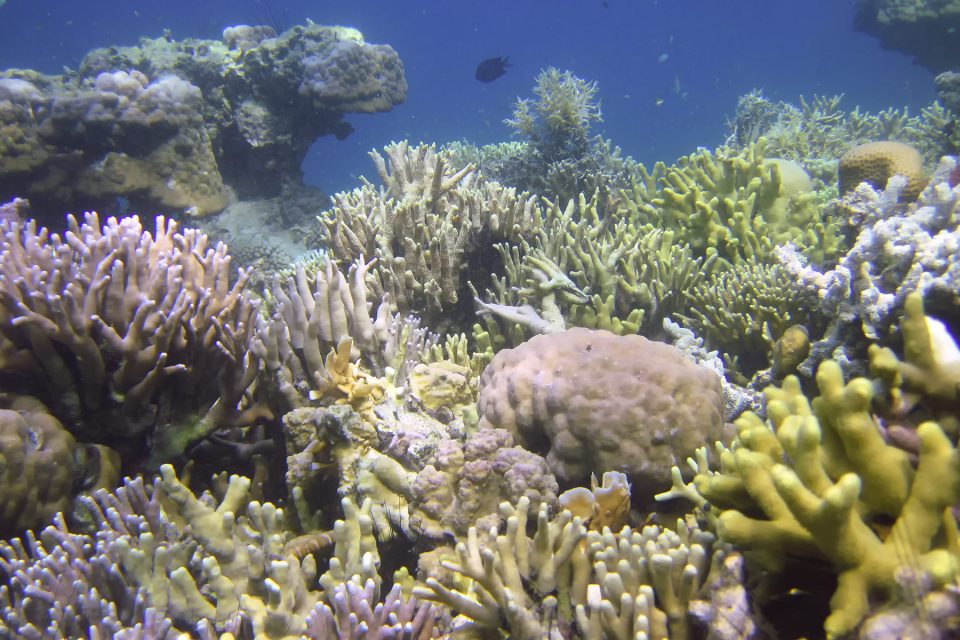 In 2010, the coral was still in much better condition than at locations further south, such as El Nido on Palawan. We spotted some of the largest plate corals we’ve ever seen. The Crown-of-Thorns plague wasn’t too bad and sea life was abundant. However, after Super Typhoon Haiyan hit in 2013 and the ongoing effects of climate change, the quality of the coral is likely to have suffered since then. (And don’t even get me started on the tourists who like to hold on to the coral or snap off a piece for a souvenir.) 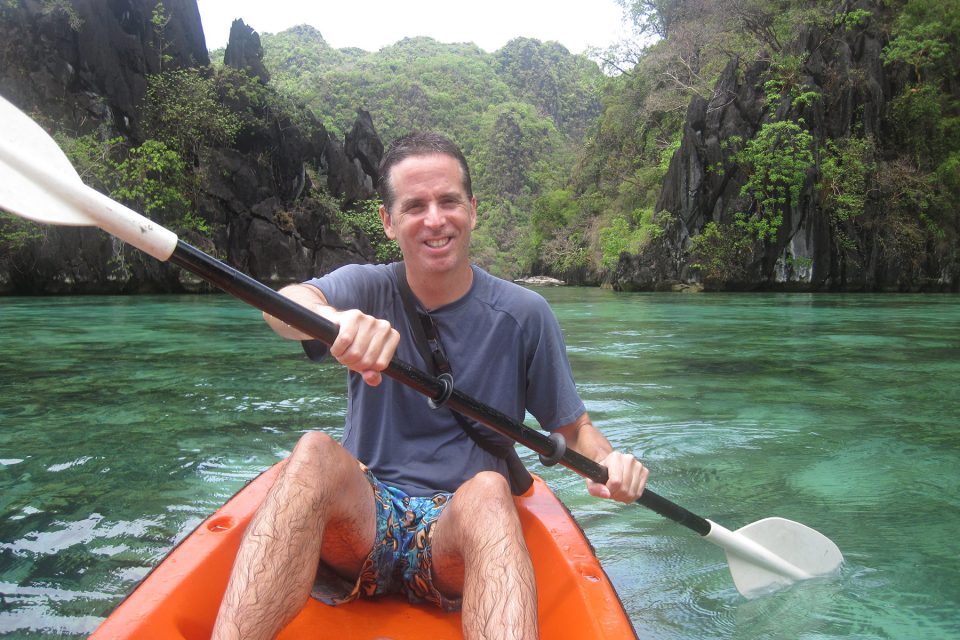 The most spectacular coves lie to the west of Barracuda Lake continuing beyond Twin Lagoons. Remember that it’s a long paddle back at the end of the day after exploring the island, so don’t burn yourself out too early. It’s a marathon, not a sprint. But for those who take the time to get off the beaten track, you will discover one of the most beautiful places in the world.

Watch our video “Kayaking in Palawan”

This footage was shot while exploring Coron Island and El Nido.