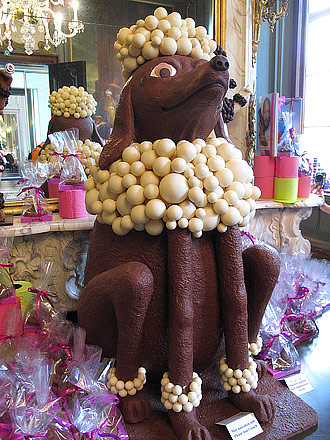 If Marie Antoinette and Willy Wonka had a love child, that would be Dominique Persoone. In the land of chocolate, the so-called “Shock-o-latier” is half rock star and half master chef. And his mouth-watering works of art are literally sold in what looks like a museum.

As soon as you enter The Chocolate Line in Antwerp, it’s clear this is no ordinary chocolatier. Looks a little like Napoleon’s kitchen? That’s because it actually was. Apparently, if it’s good enough for Napoleon, the Princess of Orange, and King Leopold II, it’s just about good enough for Persoone’s chocolate creations. 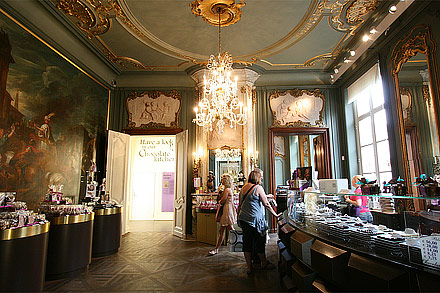 But as I wandered in, it wasn’t the opulent chandeliers, the gold-leaf molding, the full-wall paintings and mirrors, or the three-foot chocolate poodle that caught my eye, it was a tiny chocolate bonbon labelled “Bacon.” 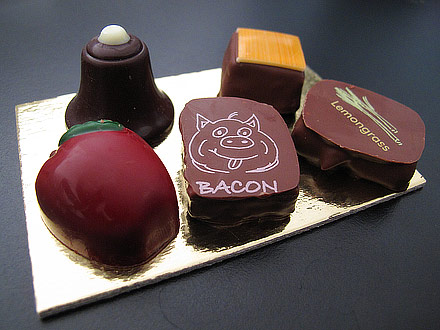 I didn’t even ask the price; I immediately started ordering: the bacon, the lemongrass, the chili, the nougat, the apple…

I’m such a barbarian. Dominique Persoone’s chocolates are so good, they have titles: Arther, Apero, Beodha, Caballo, Espelette, Fabienne and Julius. Many of the names have an international flair, such as Bangkok, Bollywood, Marrakech and Maya. But if all this is a little too exotic and the Queen is not amused – well, there’s always Earl Grey. Oops, if it’s the other kind of queen, how about Madame Butterfly? Perhaps, you’re more of a fashionista. Then you might consider a wearable chocolate dress, or you can at least pick up some chocolate lipstick. 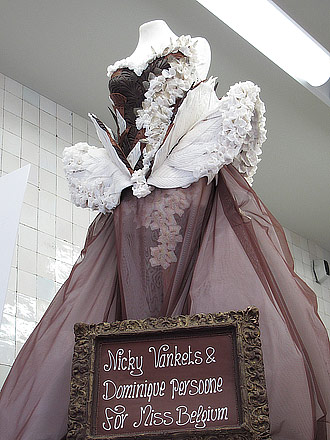 Too frou-frou. More of an alcoholic, are you? How about cognac, tequila, Cabernet Sauvignon or sake. There’s chocolate for everyone. There’s even one, Chapeau Napoléon, that seems to have been tailor-made for Thomas: marzipan, kirsch and bitter banana cream. I think Thomas just bought a plane ticket to Belgium. 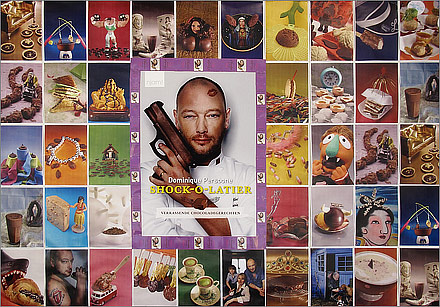 But visitors, before you start cramming chocolate into your mouth, take a few minutes to browse the wonderful world of chocolate around you. Next to the chocolate poodle, there are luxuriously packaged bags of chocolate poo. Need something a bit more fairy tale? There’s a massive chocolate frog prince as well as chocolate cartoon character fish. So how does he do it? 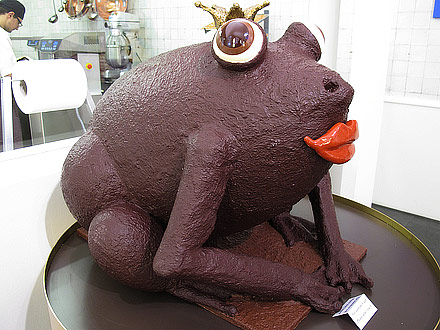 Well, Dominique doesn’t exactly have Oompa Loompas – oh, so sad – but he does have a kitchen with workers expertly preparing tray after tray of his delicious treats. Take a few minutes to go into the back and watch them work, it’s fascinating. Sorry, but I’m a little too busy to write anymore.

TIP: For those of you who are not traveling to Antwerp, The Chocolate Line has a shop in Brugge as well, but it’s not quite as palatial as the shop in Antwerp.