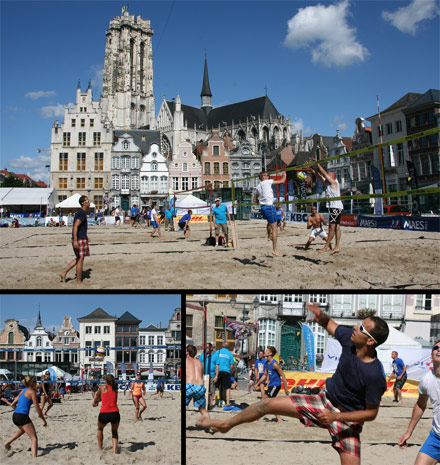 Well, now I’ve seen everything. I thought I was coming to just another insanely beautiful historical town centered around yet another ridiculously spectacular monster cathedral. But oh no, clearly the people of Mechelen do things a little differently around here. Very differently.

Emerging into the center of town via a boulevard of red-brick gingerbread gabled houses, I expected my highlight to be the famous Renaissance Town Hall. Instead, I discovered locals had decided to blanket the village square in a layer of sand and have a beach volleyball tournament. (My god, Flanders really is a festival! Do these people ever take a day off?) Katy Perry’s “I Kissed a Girl” echoed across the makeshift medieval beach as dozens of super-fit, super-tanned Flemish served and spiked their way towards the prize. Wow!

But it’s not just the volleyball. Everything in this incredibly picturesque little village is just a bit edgier. From the floating footpath on the river Dyle to the 360-panoramic skywalk built into St. Rumbolt’s Tower, Mechelen is full of surprises. There’s even a fantastic brewery, Het Anker, located just behind the local begijnhof, one of the sprawling communities of nuns that were once common in the Pays-Bas. Clearly, the people of Mechelen put a little extra into everything they do. 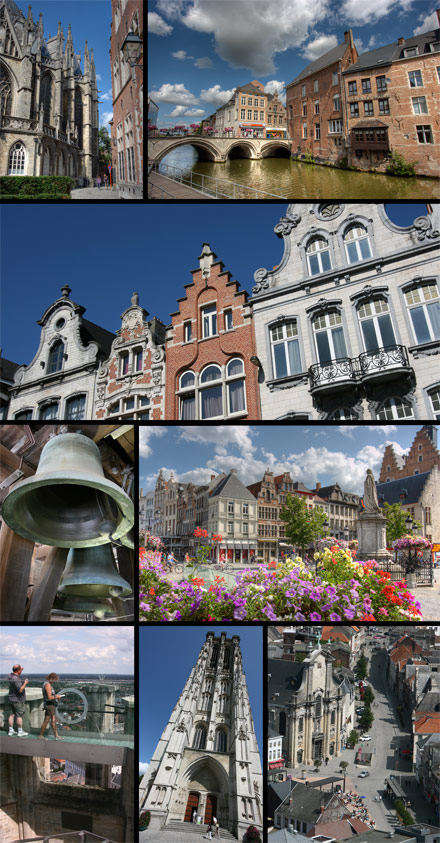 But perhaps most impressively, this tiny town even has the stuff to take on the darker side of its history. Kazerne Dossin, a barracks once used to round up Jews and gypsies for deportation to concentration camps, is being converted into a museum dedicated to victims of the holocaust as well as a documentation center on human rights. That’s incredibly impressive as many much larger cities don’t have the historical sensitivity and political will necessary for such a project.

On a much lighter note, visitors to Mechelen will quickly discover that the wonderful mix of history and style seeps into just about everything here, including the hotels and restaurants. Tourism Mechelen hosted me in the wonderful Mercure Mechelen Vé, an artsy boutique hotel built in an old fishery smokehouse dating from 1923. They also invited me to dine at Het Nieuw Werk, an amazing little restaurant behind St. Rumbolt’s Cathedral. (I had the Scottish salmon carpaccio, chicken with Canadian lobster, and the black and white chocolate mousse – yum!)

Of course, I would recommend both places as well as the funky little town of Mechelen itself. It really doesn’t get friendlier and more inviting than this. But I just have one question: Who is going to sweep up all that sand?