After our spectacular hike down the back side of Emei Shan away from the crowds, we re-entered the areas accessible by bus. There, hiding among the crowds of Chinese tourists, was Emei Shan’s dark secret – the “Ecological Monkey Zone,” the most unbelievably stupid, ignorant testament to human idiocy that I have ever experienced. 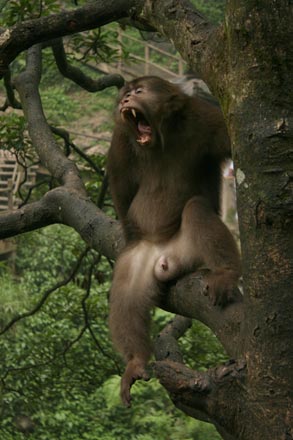 Let me back up – Emei Shan’s slopes are covered with wild monkeys, many of which live natural lives. On the upper slopes, we spent quite a bit of time watching the monkeys’ natural behaviors – a real joy.

But as you descend the mountain, especially near temples, the monkeys start to get more and more aggressive. Near one temple, a monkey ran up to Thomas and pulled a bottle of Coke out of the side pocket of my backpack (which he was in the process of guarding for me.) 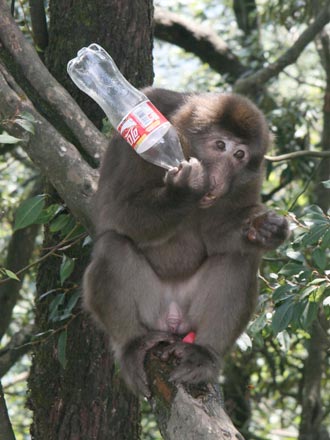 After finishing my Coke (which had cost me a small fortune), that same monkey walked into a group of Chinese tourists straight up to an old woman and ripped a bottle of green tea out of her hands. Yikes!

Such unfortunate behavior is common in parks all over the world where protections are not in place to prevent visitors from feeding wild animals.

But China being China has taken this to a new low.

Imagine hundreds and hundreds of tourists being actively encouraged to feed the monkeys. Now imagine, park employees being hired to physically beat the monkeys back with bamboo rods while the tourists egg them on with tasty treats. Imagine monkeys being hit in the face, the back, the legs – and being hit HARD! That’s Emei Shan’s “Ecological Monkey Zone” – otherwise known as the shame and disgrace of UNESCO.

Now imagine Tony going ape-shit all over the park employees 🙂 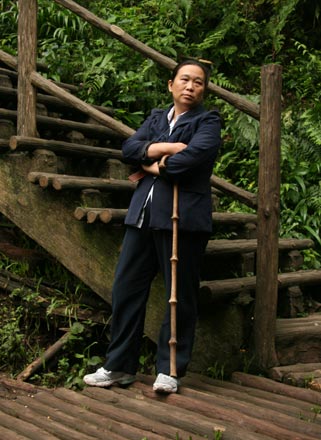 6 responses to “Spanking the Monkey – Literally!”