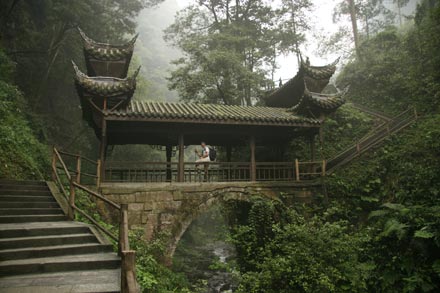 Emei Shan is easily one of the most difficult-to-photograph places that I have ever visited in my life. Snapshots and even 360 panoramas cannot easily capture the incredible beauty of the mountain. 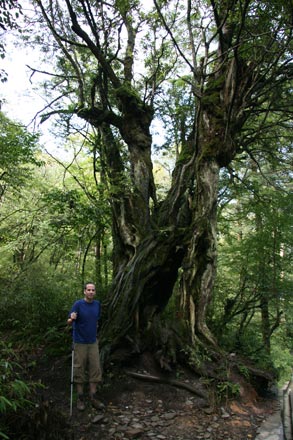 It’s the process of moving along the mountain’s narrow stone paths that allows you to piece together the soaring karst peaks, misty vistas, deep ravines, gnarled trees, waterfalls, stone bridges, caves, butterflies, stick insects, temples, and monasteries into one phenomenal landscape. Our hike down was literally like walking through the ultimate Chinese painting. And at night, we fell asleep to the sound of monks chanting in the monastery where we overnighted. Simply amazing! 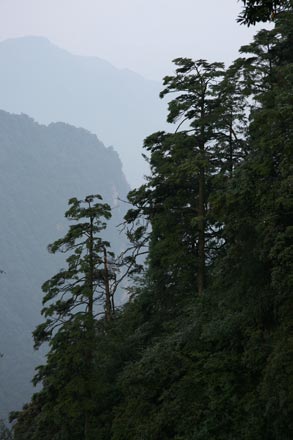 But our Canadian savior was absolutely right. Our two-day 40 kilometer (24 mile) hike went pretty much straight down. One horrific section was a nearly vertical 6 kilometers (3.6 miles) down. Along the way, we met Western and Chinese hikers huffing and puffing their way up. Most of them looked absolutely miserable at best, and in a couple of situations, I was worried the person was going to drop over dead. The vast majority of them seemed to be paying very little attention to the spectacular landscape, which is quite understandable. The bravest, and most defiant among them claimed that they were happy to be walking up because the walk down would have hurt their knees. Yeah, right 🙂 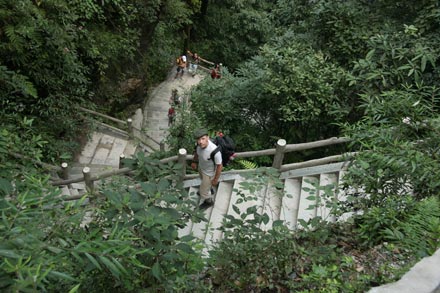 Back down the mountain, waiting for dinner in the guesthouse, an American girl asked us about the hike. Happy to pass on the advice we had received, we suggested she take the bus to the top and hike down the back route. As the waitress served our dinner, the American girl’s receptiveness seemed to completely reverse itself and she insisted she was going to hike up anyway. Perplexed at her reversal, we suddenly noticed her and her boyfriend eyeing our hamburgers and french fries with a look of condemnation. What can I say – we wanted hamburgers!

2 responses to “Emei Shan – Hiking Down”