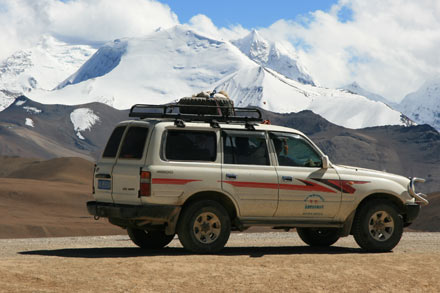 Pema, our driver, carefully navigated the hairpin turns and steep drop-offs as suicidal Chinese drivers blasted past us inches from death. As each passed, Pema would sigh and indicate that they were self-important Chinese officials. I raged at their idiocy and their lack of respect for our lives as well as their own. The dumb stunts the Chinese drivers pulled were infuriating.

Dodging the onslaught of idiot drivers, we eventually wound our way down to Nyalam where we stopped to wait for the caravan to the Nepali border. All cars are required to travel in a caravan in one direction from Nyalam to the border town of Zhangmu along an insanely narrow road carved out of the sheer canyon walls. This road was easily the most spectacular 45 minute stretch of road I have ever experienced (or probably ever will.) 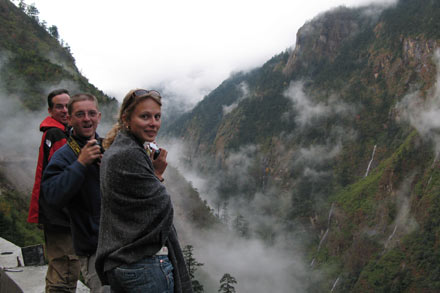 In less than an hour, you drop from desert to pine forest to deciduous forest ending in tropical jungle filled with buzzing, dinging insects! You start surrounded by the Himalayas and end in plummeting gorges filled with ribbon-like waterfalls not unlike the steep gorges in Kauai. At points, the road (which is one solid, permanent construction site) actually passes through waterfalls – the drivers all stopped their cars under the falls to wash the desert dust off the cars. The trip down ends at the border city of Zhangmu, an unbelievable construction clinging to the steep canyon slopes.

After a night in Zhangmu, we rushed down to the border crossing to fight our way through the Chinese bureaucracy to exit the country. The Chinese border station is a shockingly chaotic and embarrassingly confused place with meaningless forms and bored bureaucrats who, after arriving more than an hour late to work, seemed completely uninterested in everything they made us do. (After requiring everyone to fill out declarations that we didn’t have any bird-flu symptoms, there was nobody to collect the forms, so we ended up just stuffing them in our pockets.)

Once we were through the paper obstacle course, we hired a minivan driven by a young woman to drive us across the very long no-man’s land between the borders. As I was contemplating how impressively progressive it was that our driver was a young woman, she hit the gas and our van went flying down the dirt road shooting around hairpin turns dodging pack animals and Tibetan and Nepali traders walking along the terribly neglected road. On several occasions, she came within inches of the roads precipitous edge (much to Thomas’ aggressively voiced distress).

Suddenly, the woman slammed on the brakes and informed us that she could drive no further due to the backup of vehicles waiting to cross the border. Thomas, Irina, Dimitri, and I piled out of the van and walked the remainder of the way down the muddy switchbacks through honking trucks and Chinese buses to the Friendship Bridge, which connects the two countries over a steep river gorge.

The other side of the bridge was a world away. Blocky, functional, Chinese cement boxes gave way to colorful wooden Nepali architecture. Nepali foods and spices permeated the air. Everyone suddenly spoke fantastic English and casually greeted us, welcoming us to Nepal. Smiling, happy faces. All of us felt like we had been transported to the other side of the world. In a drive that would normally last less than an hour, we had gone from desert to jungle, from sand storms to waterfalls, from nomads to the hustle and bustle of the subcontinent.

One response to “Crossing to Nepal”