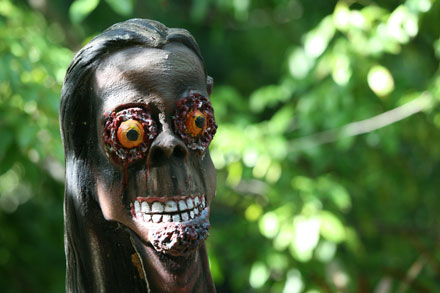 I love Buddhist hell. Well, at least from an outsider’s perspective. Depictions of people being tortured in the afterlife are goriest, sickest and most twisted in the Buddhist faith. You do have to wonder what convoluted minds come up with this stuff.

While in Phang Nga town, we visited Tapan Cave (also called Heaven and Hell Cave) and the associated Wat Tapan. Expecting a golden Thai temple, we quickly found ourselves amidst life-size demons savagely punishing Buddhist wrong-doers. We had obviously arrived in hell. 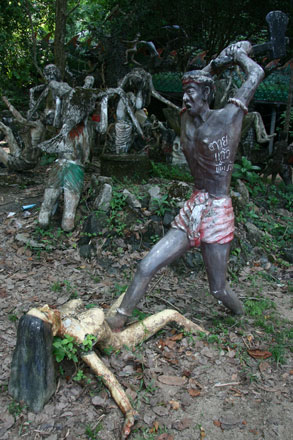 We were lost in a forest of screaming people impaled through every imaginable orifice. Decapitation, flogging, lynching – you name it, they depict it. Karma seemed to literally have come back to bite some people on the ass (and sometimes even on the boob). 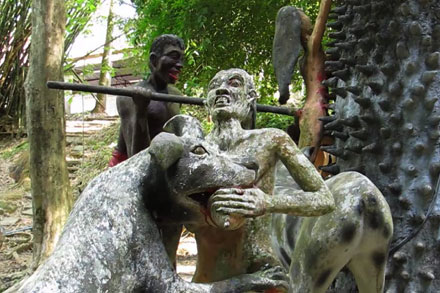 Ripped-out tongues and eyeballs seemed like minor injuries compared to some of the bloody scenes. Body parts were hacked off with axes, intestines were generously thrown about, and whole bodies were actually being put through the spiked wringer. The monks even had the humor to depict the squished bodies coming out the other side with waffle-like indentations. Damn, if that life-sized diorama doesn’t keep you on the right path, what will? 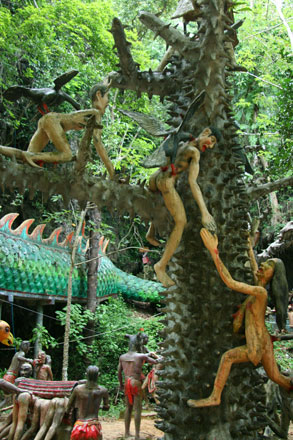 Moving past the forest of tortured souls, we descended the slippery slopes (bat guano) into the depths of hell itself, the Tapan Cave, a location for monks to meditate on the evils of worldly existence. Unlike Christian hell, naraka or Buddhist hell is only a temporary place from which the tortured can move on to a higher (and friendlier) realm. Luckily, tourists can escape such horrors even faster. From the Tapan Cave, they can bypass hell by way of a dragon bridge and pop out the dragon’s mouth near heaven. 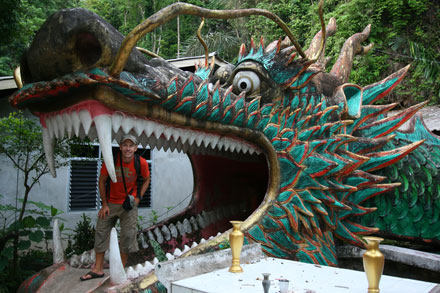 Heaven starts with a large cliff face featuring a collection of different gods including, most prominently, a comic-book Shiva. Further in, a rather cool Buddha emanates a web of strings which represent the ties uniting all living beings. All very cool, but hell was definitely a bigger kick. 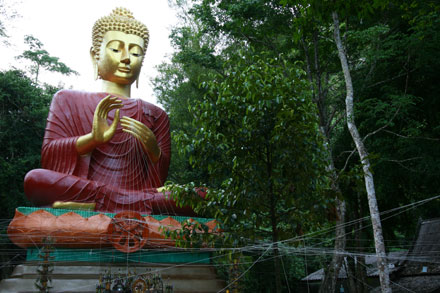 Almost as great as hell itself was watching Western visitors’ reactions. Most tourists were quite disturbed by what they perceived to be very un-Buddhist cement kitsch. Tony and I, on the other hand, love stuff like this. In fact, we have gathered quite a collection of Buddhist hell depictions. Check out these past postings to see some more of the Buddhist underworld: Buddha Park Xieng Khuan in Laos, giant Buddha Bodhi Tataung in Myanmar, and the White Temple in Thailand.

4 responses to “Heaven and Hell”