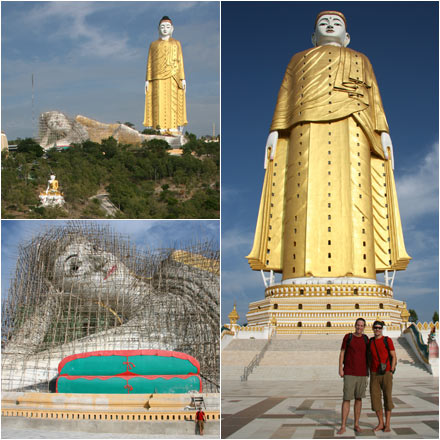 It’s quite telling that Monywa and its ginormous Laykyun Setkyar at the wild Bodhi Tataung complex barely register as a bleep on the travelers’ radar screen. In what other country would a 312-foot reclining Buddha backed by the Laykyun Setkyar, a 423-foot standing Buddha (much taller than Lady Liberty) not merit a visit. In fact this standing Buddha is the second tallest statue in the world. However, in architecturally overwhelmed Myanmar, it’s just another massive monument.

True, they’re relatively new constructions, but they’re impressive all the same. If it makes snobby monument connoisseurs feel better, the towering figures are already starting to crumble and should look like ruins within a decade. Give the site time to mature.

Thomas and I explored the cavernous interior of the reclining Buddha, but I was a touch worried that the roof might collapse. As for the standing Buddha, we climbed to its navel before we were turned back by construction workers. We could have taken the elevator but it was shut down because, apparently, it had previously come crashing down “killing all those on board.”

The interior of the standing Buddha was painted with warm, fuzzy images of demons torturing human souls. My favorite was the one featuring hungry demons making a human shish kebab, although the depiction of the monsters stir-frying people wasn’t bad either. Other murals featured demons hammering stakes through people’s heads and vicious dogs ripping bodies to shreds. The art created the perfect ambiance for the towering Buddhist deathtrap, a monument among monuments. 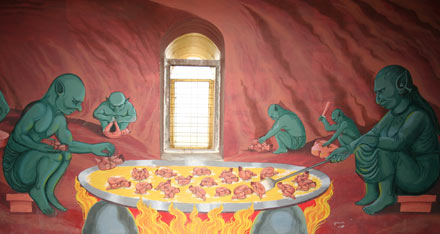