I fell in love with Phang Nga Bay, and karst landscapes in general, when I first set eyes on Koh Ping Kan in the wonderfully cheesy ’70s James Bond flick The Man with the Golden Gun. 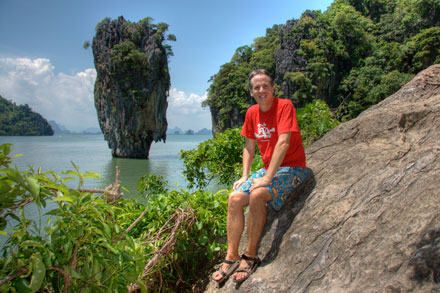 Yes, little James Bond Island just might be the worst tourist trap in all of Thailand these days, but it wasn’t always so. When I first visited in 1990, it was a beautiful island with visions of Britt Ekland running barefoot across the sands. I liked it so much, I returned in 1991 for a second visit.

But almost exactly twenty years after my second visit, James Bond Island is clearly past its prime. Rows of tourist crap stalls and crowds of people mar the beauty of this once idyllic natural location. Surely, 90 percent of the young flashpackers and Chinese package tourists who swarm the island have never seen The Man with the Golden Gun and therefore have no reason to visit this island over any of the others. Simply too many people. But this problem is not unique to little Koh Ping Kan. 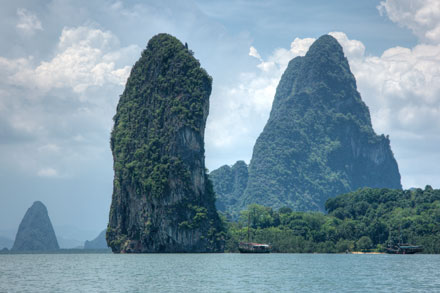 Portions of Phang Nga National Park are overwhelmed with buzzing longtails, swirling vortexes of trash dumped into the sea, and motorized tourist barges geared towards huge groups of Asian tourists. (Some of the boats are ridiculously large.) Phang Nga has several very obvious problems and the Thai government needs to realize that there are limits to how much nature can withstand. I know I sound like a broken record here, but there is no denying that many Asian governments are running their national treasures into the ground to make an easy buck.

That said, a well focused mind with blinders on should be able to see past the hordes and the trash to the endless maze of waterways winding in and out of the mangroves and the spectacular vertical islands of karst. Despite human impact, Phang Nga Bay remains one of nature’s masterpieces.  In addition, intriguing ancient cave paintings add a touch of mystique to the breath-taking landscape. 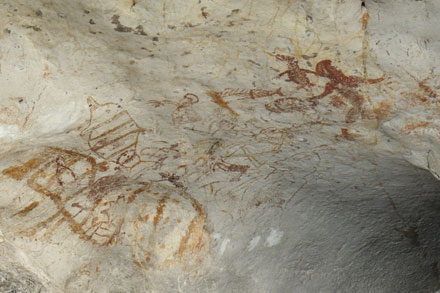 Yes, Phang Nga is overwhelmed, but I still  love this fading Bond beauty. Then again, I’m a really big karst fan and a really big Bond fan. And as much as I hate to admit this, The Man with the Golden Gun was always one of my favorites. (I can hear the Bond purists gagging.)

If you do watch the movie and Bond’s arrival in Phang Nga Bay, don’t be surprised by the Chinese soldiers. In the film, Bond was supposed to be sneaking into the islands along the Chinese-Vietnamese border north of Halong Bay.

Tips for Visitors to the Region

The busiest part of Phang Nga is the area between James Bond Island and the Muslim stilt village at Koh Panyi.  Half-day tours are likely to focus on these areas, whereas full-day tours may take in some additional islands as well as the mangroves along the coast. (Winding through the less visited mangroves was a major highlight for us.)

There are also many opportunities to visit less frequented areas such as Koh Yao Noi, Koh Yao Yai and eastern portions of the bay accessible from Ao Leuk and Ao Nang.  It is important to remember that none of these areas is truly “off the beaten track.”

If you just want to see beautiful karst islands in the sea, remember that such formations run the length of the Andaman Coast down through Krabi, Trang and, to a lesser extent, Satun. Again, you’ll share the landscape with other visitors in all of these regions, although they are currently less overwhelmed than Phang Nga Bay.