The world is full of crazy geniuses who feel compelled to leave their mark on the world. These odd monuments, products of psycho-savants, reveal everything from extreme religious devotion to an obsessive love of trash. 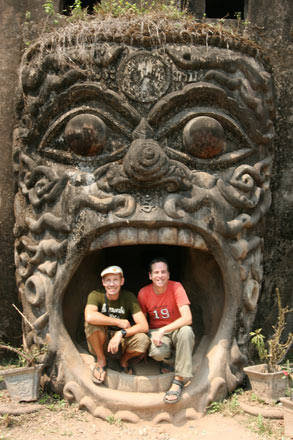 A large number of these bizarre creations are found in the US, including: Carhenge, the Winchester House, the Coral Castle, and the Corn Palace. But odd monuments are not exclusive to America. Back in Berlin we had Molecule Man, the metal monstrosities behind the Tacheles, or the odd mechanical sculptures in the alley next to Hackesche Höfe. India is the proud home of the trash sculpture gardens outside Chandigarh and the Matrimandir and its devotional crystal orb in the hippie-commune of Auroville.

Not wanting to be left out of the game, Laos serves up a blend of lunacy and religion in the cement gardens of Xieng Khuan. Created by Luang Pu Bunleua Sulilat in 1958, cement has never looked so good as Buddhas and multi-armed Hindu gods share space with a host of fanciful creatures and what looks like a Mayan-style pyramid. But these figures are just the beginning. 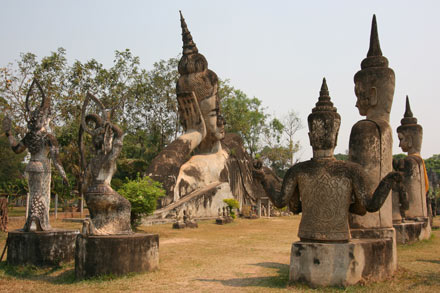 The piece de resistance of Xieng Khuan is the three-story pumpkin temple that proves that the site’s creator was either a creative genius or a total madman. (And I use madman in the best possible sense of the word.) The huge pumpkin-shaped monument, which sprouts a bizarre tree of life on its roof, is divided into into three levels representing hell, earth, and heaven. 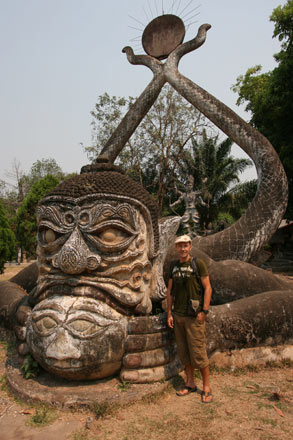 Visitors, who enter the pumpkin through a gaping monster mouth, are invited to work their way to the roof via one of two paths. The first path follows a set of stairs through the outer shell of the temple. Visitors following this easier path are invited to peak through windows into the representations of hell, earth and heaven at a mangled universe of demons, mermaids, and gods dancing in a forest of tangled cement roots.

More adventurous visitors can crawl through the inner core of the pumpkin into the cement diorama rooms climbing and worming their way to the roof. It’s not that easy, but I love the fact that the creator wanted to challenge visitors with this second route. 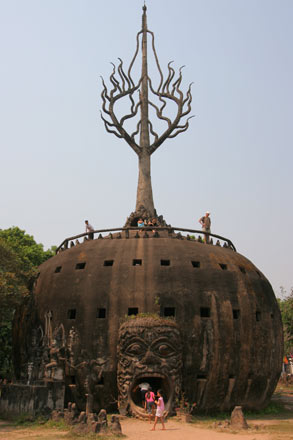 Laziness, the extreme heat, and Buddha overload almost kept us from visiting Xieng Khuan. That would have been a real tragedy as the site is completely unique and very worthwhile. The vision and the humor shine, and in its own way, Xieng Khuan seems to convey the beauty of Buddhism far better than most straight-forward temples. It’s a definite must-see for anyone who visits Vientiane.