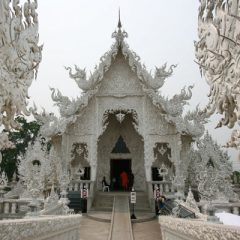 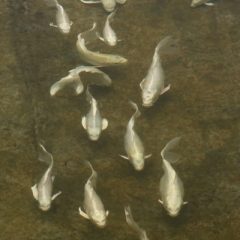 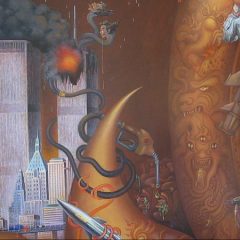 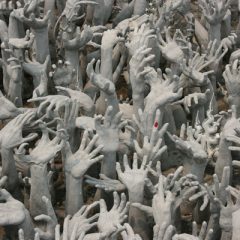 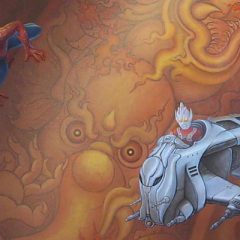 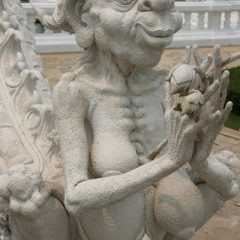 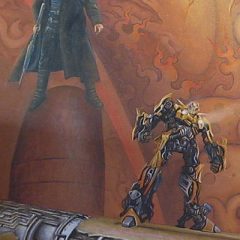 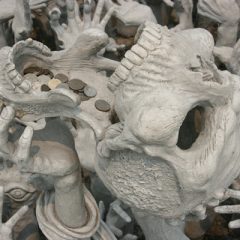 Those of you who have been following our blog in Laos, might remember from my post on Xieng Khuan that I have a particular passion for monuments designed by oddball geniuses. So when we crossed the border from western Laos into northern Thailand near the town of Chiang Rai, we made a beeline for the outrageous White Temple, officially known as the Wat Rong Khun, created by artist/philosopher Chalermchai Kositpipat.

Rumors and descriptions of this bizarre, modern temple have been swirling around us the entire time we have been in Southeast Asia. The snow-white edifice features gargoyle-like decorative statues, pools of white coy, and gardens of writhing human hand statues reaching up from hell below.

But the White Temple’s piece de resistance is its enormous mural of an earthly hell featuring crumbling twin towers, comic book characters, Neo from the Matrix, and even a demon that looks suspiciously like Jabba the Hutt. The temple’s provocative murals challenge Western culture, our materialistic instincts, our obsession with violent imagery and humanity’s war-like ways. I came to the White Temple ready to love its quirky edginess and its philosophical blend of Buddhism and popular culture.

But I didn’t love it.

As I moved through the temple, I began to feel an overwhelming vibe of… well… of religio-bullshit. In pictures, the temple appears strikingly monochromatic, a challenge to the colorful palette of traditional Thai Buddhist architecture. Up close, it felt more like Disneyland. I enjoyed the playful gargoyles and the eerie garden of hands (especially the hand with the red fingernail which is flipping off the world). But unlike Xieng Khuan in Laos, which oozes genuine madness and devotion, the White Temple felt contrived.

Most disturbing was the mural of an earthly hell. From descriptions of the murals provocative content, I expected a fearless examination of the world’s evils and humanity’s obsessive struggle with irrelevant philosophies. I was ready to dive in. But as I studied the mural, I realized the depiction of the collapsing World Trade Center contained no references to the event’s causes other than Bush’s and Blair’s demonic heads emerging from the right tower. I searched the mural for references to Islamic fundamentalism or even the attackers. There were none. Initially, I couldn’t really explain the absence.

In the mural’s examination of worldly evil, I searched for depictions of the invasion of Tibet or oppression in Myanmar. None. All references to consumerism and excessive materialism were Western (or occasionally Japanese). No depictions of China, Thailand, Vietnam – all of which have become obsessively materialistic. And then it struck me – Kositpipat’s approach to controversy and provocative thought was, well, cowardly.

He refuses to make references to Islamic fundamentalism or 9/11 attackers because he fears making his glorious temple a target for terrorists. (Southern Thailand is currently waging an ongoing struggle against Muslim separatist groups, so this fear is warranted.) Moreover, any controversial references to China and Southeast Asia might offend visitors from these nations, most of whom are filling his donation boxes to the rim.

Perhaps, the most hypocritical aspect of the temple was the extensive reference to the evils of materialism and consumerism in a complex where visitors enter through a large temple tourist market with souvenirs, fast food, and tacky tourist paraphernalia. Adjoining the temple, Kositpipat offers his over-priced works of art for sale as originals or not-so-limited prints, calenders, diaries, day books, mouse pads… the list goes on. Many of these products feature sappy Buddhist quotes about the dangers of loving money and Kositpipat’s own personal views on the unimportance of wealth. I assume he makes a fortune off of this crap.

Indeed, it felt as though Kositpipat is Asia’s own version of consumer Christian artist extraordinaire Thomas Kinkade. The more I looked at the temple, the more it reminded me of one of Kinkade’s real estate developments for lovers of his art. And, yet, I would highly recommend that all visitors to Chiang Rai head straight for the temple. It may be many things, but boring it ain’t.

Feel free to disregard my opinionated comments here as simply another American who is offended by the 9/11 references in the Buddhist murals. I’m sure many will assume that is the case. Those who know me will immediately recognize that has little to do with my feelings about the temple. It is much more the atmosphere of cheesy, marketed religion for simpletons. I hate that. It says “Opinion” in the graphic at the top of the page for a reason. Have at me in the comments section if you think I’ve been unfair.

5 responses to “The White Temple”