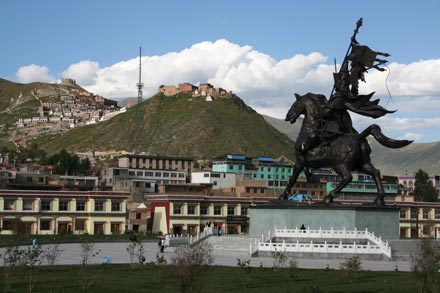 We’ve crossed the border into Qinghai province and made our way to one of the remotest corners in China – Yushu.

Although the town is the absolute definition of isolated, it is actually quite a big place, which gives us the strange feeling of being back in “civilization.” There are grocery stores (with chocolate), crowded streets, and oddly large, overpriced tourist hotels with few tourists. The weird thing is that the next real city is over 800 km (500 miles) away. It’s a kind of strange urban island in the middle of the super-high grassland plateau of western Qinghai, a region sparsely populated by Tibetan nomads.

I don’t know if I love it or hate it, but at least I can load up on Snickers!