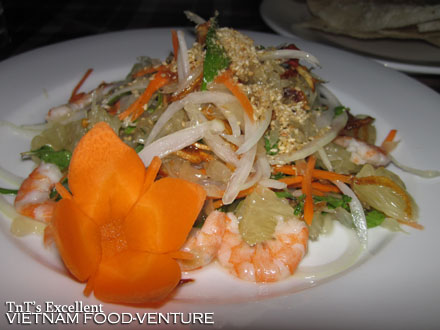 What I really love about Vietnamese food is the integration of fresh, uncooked fruit and vegetables into many of the dishes. If you like light and fresh, it doesn’t get much better than Vietnamese salads. Although famous beyond the borders of Vietnam, we had a hard time finding restaurants which offered them here in the country. The last thing I wanted was a Russian salad with potatoes and mayonnaise. But then, on our last night in Hoi An, we discovered Mermaid Restaurant.

Only slightly pricier than the average tourist restaurant, Mermaid offers an array of traditional Vietnamese dishes including all of the local specialties Tony described in Hoi An for Foodies. Since we had already sampled all the classics, our last night was solely dedicated to trying some of Mermaid’s specialty salads. 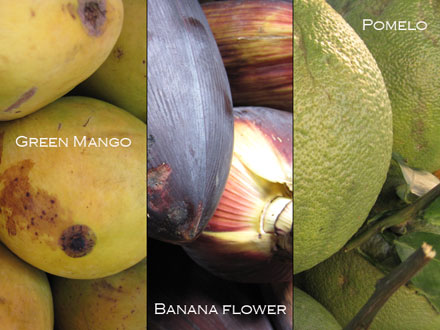 First up was a beautiful pomelo salad with sauteed shrimp, also called Goi Buoi (lead picture). As the name implies, pieces of pomelo, a grapefruit-like fruit, make up the base of the salad. Slivers of carrot and what appeared to be green papaya add to the volume and texture of the dish. As so often with Vietnamese food, the dressings are a major component creating a smooth balance between opposing flavors. It clearly helped bring the fruity pomelo and garlicky shrimp together.

Next was a banana flower salad with chicken (Goi Hoa Chuoi Ga) shown in the bottom picture. This was probably the most exotic-sounding salad we’ve had. Grated banana flower, although rather flavorless, has a great texture and gives the salad a nice crunch. Combined with carrot, Thai basil, onion, grilled chicken and sesame seeds, it is absolutely delicious. On par with these two salads was the last dish we tried, a green mango salad with shrimp (Goi Xoai). The mango was just ripe enough to add some of its own flavor. Yum. What else can I say? We were pretty much in heaven. 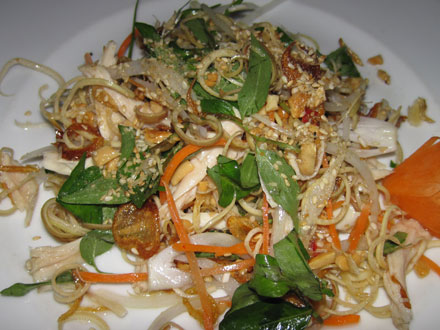 The only thing that made us sad was that we discovered Mermaid Restaurant way too late. After this amazing dinner, we probably would have eaten there every night. Completely stuffed, we had to forgo the green banana and beef salad as well as their version of the classic green papaya salad. I guess that’s just another reason to come back to Hoi An.