The Citadel of Hue 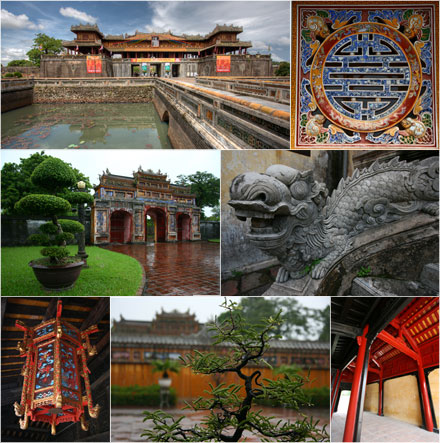 Hue, the city of imperial palaces and tombs, is on most travelers’ itineraries when they visit Vietnam. The city’s most famous attraction is the ancient Citadel and the Imperial Enclosure within. Having done a semester course in Vietnamese history and being an architecture nut, I had set my expectations pretty low for our visit to the Citadel. Between French, Vietcong, and American attacks on the city followed by years of Communist neglect of the ancient monuments, I was expecting very little to be intact. In fact, I was quite surprised by how much remained and how beautifully Hue’s monuments have been restored.

Thomas and I rented bikes and rode across the Perfume River to the Citadel’s massive 10-km outer walls. (You know I love my walled cities.) We biked along the lotus-filled moat past the massive fortified flag tower, the huge, red Vietnamese flag whipped and fluttered loudly as we passed. We entered the Citadel through the multi-tiered, pagoda-like Quang Duc Gate. Dodging kamikaze mopeds and suicidal taxi drivers, we pedaled along the inner wall and moat to the regal Ngo Mon Gate, entrance to the Imperial Enclosure. 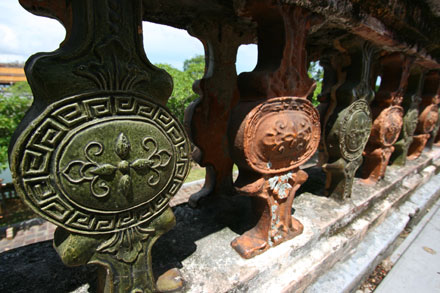 Climbing the Ngo Mon Gate’s majestic tower, the Ngu Phung, we looked out over the Thai Hoa Palace and the Halls of the Mandarins beyond. The scale of the Imperial Enclosure’s impressive moats are much easier to grasp than those of the outer fortifications. Amazingly, much of the Ngu Phung’s original glazed tiles and ornamentation appear to have survived intact.

Standing on the walls and taking in the panoramic views of the enclosure, we suddenly realized there was much more to explore than we had imagined. We began with the stunning Thai Hoa Palace, wound our way through the Halls of the Mandarins to the grand Royal Theater and the ornate Emperor’s Reading Room. The entire Purple Forbidden City, the inner domain of the Emperor, was tragically razed to the ground – what a terrible cultural loss. Bizarrely, the Emperor Bao Dai’s tennis court is really all that remains, a rather odd site amid the decisively Asian architecture and landscaping. 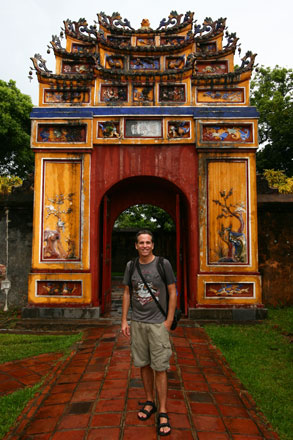 We struck out on our own into the area at the back of the Imperial Enclosure where there were far fewer tourists. A sudden rainstorm sent groups running for their buses and left much of the Dien Tho Residence to us. We took refuge under the tiled eaves of the beautiful wooden pavilion in the lily pond and watched the downpour. These moments are why we love to travel. When the rain subsided a bit, we continued on into the newly reopened Truong San Residence, a fantasy of ponds, arched bridges, sculpted gardens, and colorful pavilions. The reconstruction work is very impressive and speaks volumes for the new Vietnamese resolve to rebuild their past. 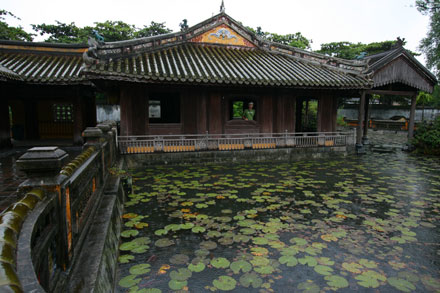 Splashing our way through the manicured grounds and ornamental gates, we continued on to the spectacular To Mieu Temple Complex, a highlight which we had saved for the end of our visit. This well-restored, walled compound lures in the visitors with the three-tiered Hien Lam pavilion, the formidable Nine Dynastic Urns, and the monumentally squat To Mieu Temple. From certain angles, this complex with its wide temples, stone courts and giant urns bore a slight resemblance to the Forbidden City in Beijing. 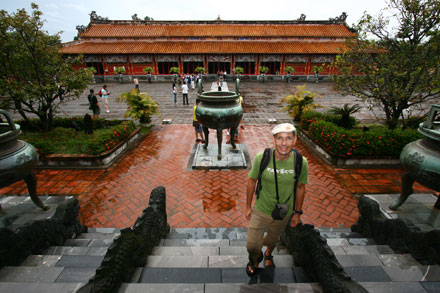 Tips for Visiting the Citadel

All in all, Hue’s Citadel was FAR more impressive and enjoyable than I had ever expected despite the fact that large portions of a once grand complex are still missing. Visitors should be sure to watch the video presentation in the Thai Hoa Palace featuring a virtual tour of the original Citadel in all its grandeur. And make sure you aren’t rushed through the place in an organized tour that limits your visit to the front of the complex. Find yourself a hidden garden or a lone pavilion and take in a bit of your imperial surroundings.

One response to “The Citadel of Hue”