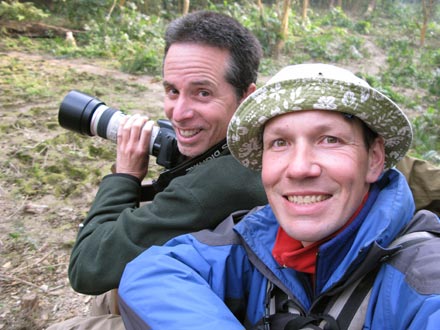 One of the highlights of Chitwan National Park was our incredible elephant-back safari. What I at first dismissed as a touristy gimmick, turned out to be a real adventure once our elephant pulled away from the crowds of tourist-laden elephants and found its own piece of jungle.

Our elephant was a MAMMOTH towering four feet above other elephants – unfortunately, this meant we were continually dodging limbs and branches during the two-hour safari. It was also nerve-wracking as our giant pachyderm rather awkwardly made his way up and down the steep, muddy slopes. (We were praying he wouldn’t slip.)

With the noise from elephants crashing through the forest and the mahouts (elephant drivers) communicating by screaming at each other, I assumed we wouldn’t see a thing – but I was wrong. We saw an enormous amount of wildlife including 4 more rhinos! In one environmentally questionable yet highly spectacular moment, as a rhino mother ran under a tree to protect her young calf, our elephant under orders from the driver walked over to the tree, ripped the entire thing out of the ground and threw it off into the jungle exposing the mother and her calf. Although I was later quite angry about the move, I will admit that at that moment I was in pure, stunned awe at the elephant’s strength and intelligence. How had the elephant known what the driver had wanted? 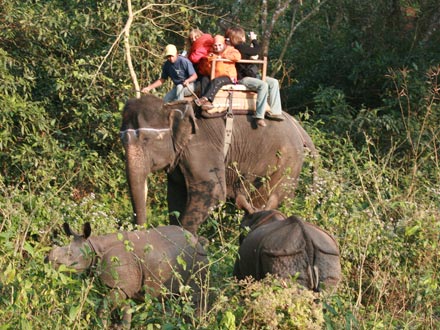 We continued to dodge branches, thorn bushes, and tree trunks as our elephant pushed his way through the dense growth through swamps and over streams to a jaw-droppingly beautiful meadow. The timing and the setting were perfect! The sun was starting to set and the surreal orange light illuminated a large herd of spotted deer grazing in the clearing. Sambar deer nibbled tree leaves off to the left and a hog deer shot past the front of our elephant as we approached. Just ahead several wild boar were digging for roots as a couple of wild peacocks milled around pecking for insects. A scene straight out of National Geographics.

After the safari, we got to ride the elephant all the way back to town. As we passed a collection of mud huts, a woman ran up and yelled, “Buy bananas for elephant.” Annoyed at our guide for his questionable move in the forest as well as his aggressive behavior towards our elephant (not at all typical of the mahouts), I decided to invest tip money in the elephant rather than the driver. I dropped down some rupees and the woman tossed a bunch of bananas up to me. I handed the bananas to Thomas for just a moment, so I could shoot some pictures. When I turned around, Thomas, looking very guilty, was munching away and half of the bananas were gone!

Can you believe he actually stole bananas from a hard-working elephant? Some of you who know Thomas well may immediately think of the scandalous story of Thomas eating 32 bananas by himself in one sitting in Ethiopia. Typical!!!