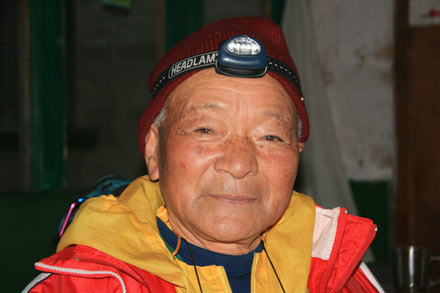 Boy, did we feel stupid complaining after a hard day’s climb when we met Shigeo Osawa, an outgoing and optimistic 84-year old Japanese man on his way to Gorak Shep (5170 m / 16,960 ft). We soon learnt that Osawa San was somewhat of a celebrity in Japan known for his adventurous spirit. Each year for the last 29 years, Shigeo Osawa has walked from Lukla to Gorak Shep, and, get this, has always celebrated New year’s day by swimming in one of the ice lakes there! As if high altitude weren’t enough – putting my body into the ice-cold water would definitely finish me off.

Shigeo Osawa was such a character showing us pictures of his previous treks and his home in Japan. As a little good-bye gift, he offered us some of his self-invented mixture of barley flour, garlic, and some secret ingredient that would ensure his potency for a long time – talk about optimism!