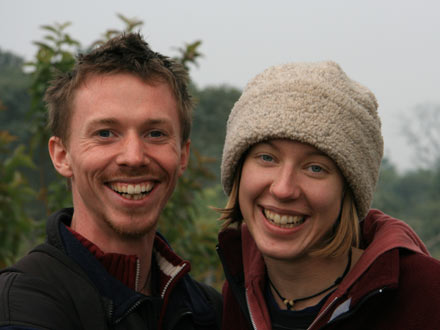 When we mentioned Contemporary Nomads Rebecca and Jonathan last September, they were just about to leave Lhasa and bike across Tibet to Kathmandu in Nepal while Tony and I were going on a Jeep tour to Mt. Kailash. Because we are traveling so slowly and have spent so much time in Nepal, they eventually caught up with us in Kathmandu where they volunteered as English teachers just outside the city for a couple of months.

Becca told us over dinner that the bike ride was one of the hardest things she had ever done. Temperatures close to freezing, dusty conditions, a lack of oxygen due to high altitude, and the constant fight to keep their weight made biking across Tibet a real challenge. (Weight Watchers would be so over if people spent their money on hiking or biking trips instead).

Unlike Tony and I, Becca and Jon did not come out of Tibet necessarily loving the people. After biking to Everest Base Camp where they narrowly escaped being fined by Chinese authorities for not having a permit, they took the most direct path along the Friendship Highway into Nepal. Contrary to what the road name may suggest, people threw things at them, kids tried to break their bikes and someone even stole their bags at one point – which, luckily, they were able to recover after bravely chasing down the thief. We have heard similar stories from other bikers in Tibet, although we never experienced such behavior ourselves.

The two of them finished volunteering in Nepal just before Christmas and flew back to Colorado to visit Becca’s family. After returning to Kathmandu, they excitedly announced their engagement to us. I was so sure the family had laid the pressure on, but Becca reassured me that they had been thinking about it for some time and that they had sprung their plans on her parents just before leaving for the airport.

The above picture of the two lovebirds was taken at the elephant sanctuary just outside Chitwan National Park where we spent a couple of days with them. They have temporarily left their bikes behind while they travel in India (a very good decision) but will return to Kathmandu to pick them up before flying to Southeast Asia where they are going to continue their wild ride.