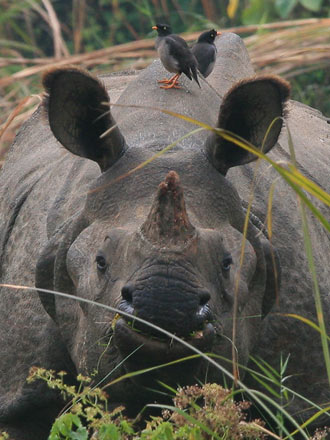 Check out this rhino I photographed during our walk in Chitwan. I was standing behind a tree clicking pictures when he noticed the clicking sound and turned right towards me! Great photo, but when he noticed me, he started grunting and snorting, so I had to slip away back into the bush.

Having seen a total of 12 rhinos in Chitwan, our previous postings may have left the impression that rhinos are a dime a dozen here. They aren’t! There is an all-out war going on between countries desperately trying to protect their rhinos and poachers who can sell the rhinos’ horns (primarily to the Chinese) for enormous sums of money. Nepal is no exception. Because this war has become so violent, Nepali troops have been positioned in Royal Chitwan National Park itself to help defend their wildlife. (Their tiger population is also threatened by poaching.) 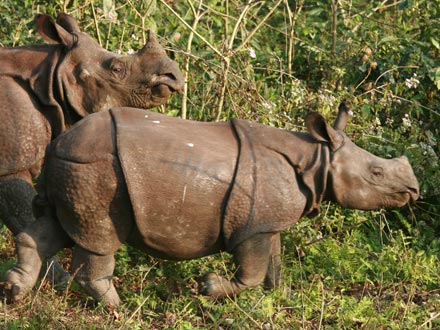 It is no small miracle that Nepal, a developing country which actually borders China, has managed to keep rhinos alive in multiple parks. Unfortunately, the government’s ongoing fight with the Maoists puts the rhino population at risk. When the government had to withdraw troops from Chitwan to fight in other parts of the country, more than a hundred rhinos were killed. But tourism is helping to stop the slaughter. Visiting the park and viewing the rhinos can help fund the fight to protect them, so if you are in Nepal, save a rhino by seeing one.

4 responses to “Rhinos at Risk”