This Could Be Heaven 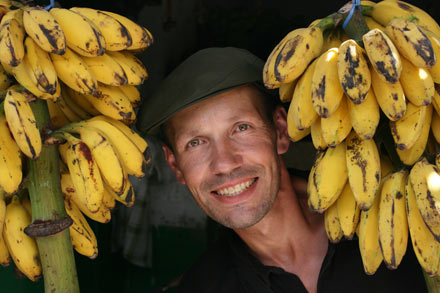 Quite disappointed about our bad timing to see the Sri Meenakshi Temple complex in Madurai (see below), we set out to explore the city in a bicycle rickshaw. Our first stop on the one-hour city tour was the banana market. What better place to lighten my mood – bananas everywhere.

Red, green, and yellow, the bananas dangled from hooks right in front of my face. The huge colorful piles filling the stalls overflowed on to the market floor. One after another, people marched in to the market with loads of bananas stacked up on their heads; they dropped them at my feet like some kind of fruit tribute. The fact that our rickshaw driver had just ditched us for a higher-paying customer didn’t faze me at all. I was in banana heaven. 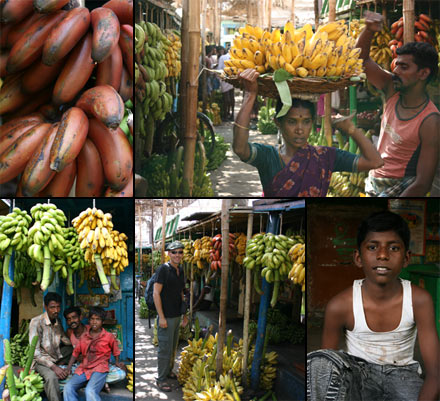 But the most remarkable part of the banana market was the super friendly vendors. When I asked one to take his picture, he immediately said yes and smoothed out his shirt for his portrait. But after admiring himself on the display, rather than demanding money, he gave me a banana as a thank you for taking his picture. Can you believe that?

Then another man asked me to take his picture. Again, another banana as a thank you. This happened over and over, and every time a banana thank you. I stuffed my stomach until my waistband was about to pop – and I didn’t even have to pay for any of it.

Tony even gave me all of his bananas (except for one). Honestly, they would’ve been a waste on him anyway, he only sees bananas in one context: banana split. I, on the other hand, enjoy them in any form.

Meeting the banana market vendors was really one of the most touching experiences I’ve had here in India. These were obviously people struggling to make a living, but nobody wanted anything. We have never experienced such generosity. 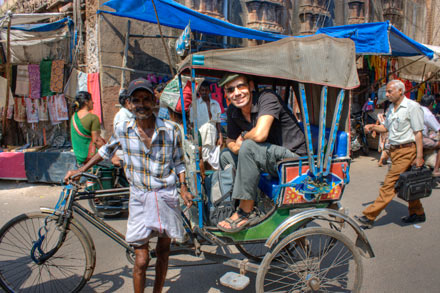 2 responses to “This Could Be Heaven”