The southeastern state of Tamil Nadu is famous for many things: national parks, temples and plenty of coastline. Our main motivation for coming here is to photograph the outrageous Dravidian temple architecture and mingle with the thousands of pilgrims worshipping at these places. 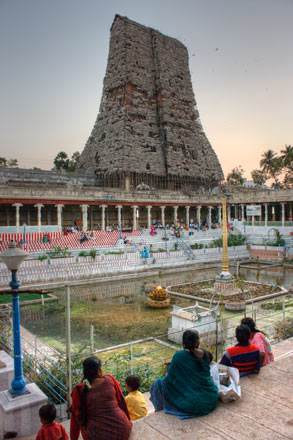 The Hindu temples here are mind-boggling – they are amazingly colorful and very different from other Hindu temples we’ve seen. Of particular interest are the temple complexes housing the soaring gateway towers (gopurams) which reach heights up to 50 meters (150 ft)! But size is not all that matters. The gopurams are typically covered with colorful stucco figures depicting gods, goddesses, mythical animals and monsters. And every bit of space is used creating this eye-popping mixture of colors and shapes.

Having done our research, we headed to Madurai, one of southern India’s greatest temple towns to see the famous Sri Meenakshi Temple dedicated to Shiva. Bogged down with camera equipment, we were ready to be awed by the temple’s 12 (!) gateway towers. When we approached the busy complex, we got a first good look of….we weren’t quite sure of what. Something tall trapped in a bamboo scaffolding and wrapped in raffia mats. We quickly realized that every single gopuram was hidden beneath these mats. We were utterly shocked!

When we asked a temple guardian what was going on, he told us that the figures were repaired and repainted every 12 years, and that the temple was then reconsecrated on Shiva’s birthday at the beginning of April. Damn, our research didn’t bring that to light. Well, leave it to India to work on every single tower at the same time and skillfully cover them up. what a disappointment!

We did manage to sneak a peak through the mats on a couple of towers and see some of the hidden treasures. The figures reminded me of Mexican papier-mÃ¢chÃ© but with a Hindu twist. What a bummer that we couldn’t see more. But there are other such temples in Tamil Nadu and we are determined to get our pictures. Just make sure you remember this posting when you come here in 2021!

One response to “Bad Timing”