The Wrecks of Busuanga

For divers in the know, Busuanga Island is synonymous with world-class wreck diving. Often labeled the Truk Lagoon of the Philippines, the channels between Busuanga and Culion are home to a number of impressive wrecks from a Japanese supply fleet bombed in September, 1944.

Thomas and I started by diving the Kogyo Maru and the Tangat Wrecks together. The two ships are quite impressive dives with swim-throughs that ease newbies into the complexities and dangers of wreck diving. 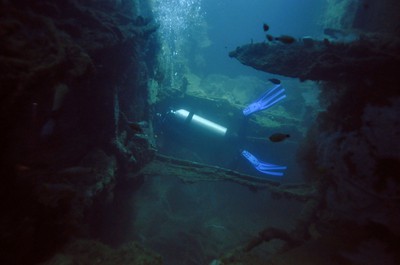 The Kogyo Maru, a 129m (425ft) navy auxiliary supply ship, rests on its starboard side with coral-encrusted masts and superstructure extending out into the water. Within a mere 66 years, an unbelievably large garden of lettuce coral has developed along its exposed port surface hiding some enormous lionfish. The entire boat was teeming with life.

We descended along the deck through huge, swirling schools of fusiliers and batfish and entered into a cargo bay featuring a toppled bulldozer and a cement mixer lying in an incline of solidified cement bags. Moving through the ship’s cargo bays, we discovered construction supplies and beautiful, abstract formations which turned out to be piles of spooled wire. Illuminated with a cold, filtered blue light, the organic and industrial merged to create an eerie scene straight out of Ridley Scott’s “Alien.”

Our second dive, the 122m (402ft) Tangat wreck, sat upright at around 30m depth with the still intact masts disappearing into the blue above us. We dropped down into the cargo hold through large schools of banana fish, past some enormous puffer fish and swam the length of the ship through a series of relatively open rooms with a couple of tight swim-throughs which were good practice for the harder ships to come. Emerging near the bow, we caught sight of a large sea turtle, which at first swam off away from us, but then doubled back and came to rest right near the tip of the bow. Beautiful.

But that wasn’t the only surprise, as we were making our way along the port side, we discovered a snow-white seahorse hiding in the soft coral. This was the first seahorse that either of us has ever seen while diving. Oh, I miss our beloved G7 with underwater housing – drat the luck!!!

Unfortunately, Thomas experienced reoccurring problems equalizing, so he had to content himself with just these two wrecks. Bummer. I continued on day two by diving the phenomenal Akitsushima and Okikawa Maru wrecks as well as the coral-covered Skeleton wreck.

The Akitsushima dive is one of the coolest things I have ever done. (I know I keep saying that in the Philippines, but – hey – it’s true.) Considered the only true “warship” dive site in the area, the 118m (389ft) ship boasts a huge stern crane once used to offload planes and deck-mounted guns with shells still lying around in the silt! Yikes, watch those flippers.

But this ship is really about the interior, which we entered through a huge tear in the hull filled with swarms of glassfish. A disorienting maze of halls, rooms, stair wells, and cargo holds, this is as good as wreck diving can get. Like mice in a scientist’s maze, we inched our way through bomb blast holes, ventilation shafts, interior doors and windows until we came to the very tight engine room which required a very cautious switchback up over the engine itself. Torn sheet metal, wires and gnarled bars protrude from every surface in the ship – it’s a real obstacle course. As if that weren’t enough of a challenge, lionfish and scorpionfish seemed to be in every nook and cranny.

Since the ship is lying on its side, vertically oriented floors have withered and crumbled into metallic slot canyons sheltering large schools of fish. We swam straight up these “canyons” to access other floors. We spent a whopping 25 minutes within the ship itself, much more than on our previous dives. And, re-emerging from the Akitsushima through a small jagged hole, I had the distinct feeling that I was no longer a wreck diving novice. 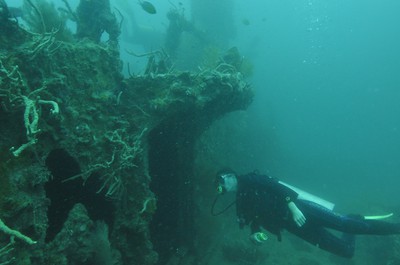 My new-found experience was almost immediately put to the test in the equally spectacular Okikawa Maru. The 160m (528ft) leviathan serves as the definition of ginormous. Considered by many to be a serious contender for the Philippines’ best wreck dive, the ship was nearly ripped in two when it was bombed, and the vessel boasts a gaping maw of bent, deformed metal that would have James Cameron blushing with envy. We entered the monstrous vessel through the propeller shaft and worked our way up through our second labyrinthine interior towards the bow. Deep within the wreck, claustrophobic rooms concealed brightly colored lobsters, which scampered into crevices as we approached. Lone fish wandered the deserted halls like ghosts. The ship would serve as the perfect set for an underwater horror film.

We emerged about mid-deck just long enough to locate a gyrating orb of tiny fish. Our dive master disappeared into the morphing orb and I followed into what turned out to be a vertical descent through a ventilation port. I have never dived headfirst straight down and it proved to be quite a strange sensation. We continued our winding explorations of the interior until we approached the highlight of the Okikawa Maru, and possibly of all the wrecks in the area, the gaping tear in the ship. Towering, magnificent curls of ripped metal surrounded us. The surreal forms, encrusted in a rainbow of corals and anemones, looked like nothing I had ever seen before. No natural formation underwater can compare. Twisted and torn, perfectly mishapen into stunning works of multi-storied art, it’s a scene I will never forget. (Isn’t it strange to have one minute to stare at something that is so utterly unique and know that you will most likely never see it again.)

To round out the afternoon, we did a shallow dive along the Skeleton Wreck and the nearby reef. Skeleton Wreck can best be described as an underwater jungle gym of coral growth which has formed over the steel ribs of the 25m (82ft) vessel. My newly refined, wreck-diving-grade buoyancy skills came in handy as our dive master actually entered the tiny wreck and navigated the beautiful coral growth. Strangely, for me personally, this swim-through was the scariest of the day because I was terrified that I might damage the beautiful formations. Beyond the wreck, we discovered a colorful expanse of prospering reef overflowing with tiny, dancing juvenile Sweetlips. The shallow depth allowed for bottom time of about one hour, which gave us plenty of time to look for some of the region’s beautiful nudibranchs.

Info on Diving the Wrecks

Our experience with the dive shop at Sea Dive Resort based in Coron Town was excellent. While Sea Dive Resort does tend to have larger groups than its competitors, the trips were professionally run, the dive masters were excellent, and they gave detailed briefings before each dive. Sea Dive rotates through a set schedule allowing divers to dive three dives a day for three days to hit each of the most famous sites in the area. While we were there, a 3-dive package cost 2900 Pesos ($64), which included an excellent onboard buffet-style lunch with chicken, fish, vegetables, and crab or squid. What’s more, soft drinks and beer were included in the price! Day 3 includes the famous deep-water Irako dive, but as there are many interesting (and pricey) activities in the area, we opted to apply our travel dollars to some sea kayaking and island hopping.

3 responses to “The Wrecks of Busuanga”