Macau was exactly what I needed after an exciting but very busy week in Hong Kong. A former Portuguese enclave, Macau resembles a Southern European city with its many beautifully restored colonial buildings in the old city center. It is much more laid back than Hong Kong and the perfect place to relax and people-watch from a cafe overlooking a cobblestone square. 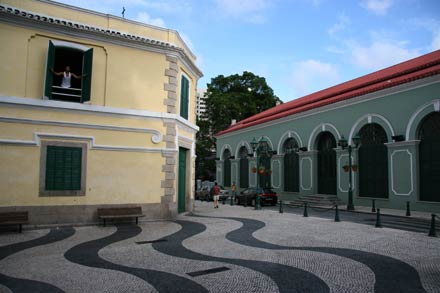 The Southern European mentality, however, comes with some baggage; long siestas which mean stores open late and close early. It was almost comical how people would glance at us upon entering their stores and then return to what they had been doing – eating or reading their newspaper. Who can blame them?

My fifth trip to Hong Kong and this is my first time in Macau. Macau is a bizarre combination of contradictions and conflicting styles. Colonial squares bump into turn-of-the-century Chinese backstreets. Brazilian-style skyscrapers with caged terraces overlook flashy casinos. One minute your eating Cantonese egg tarts the next Portuguese pastries. I love it. 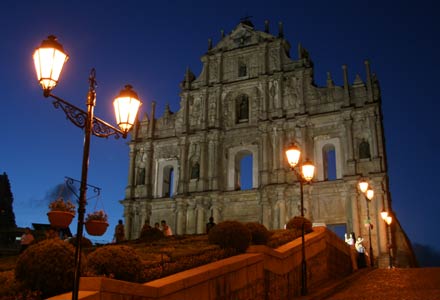 END_OF_DOCUMENT_TOKEN_TO_BE_REPLACED

We have been taking in the temples of Hong Kong Island and Kowloon.  Everybody knows I’m an architecture freak so I won’t show you all 8000 of my pictures, but here are a few to whet your appetite.

END_OF_DOCUMENT_TOKEN_TO_BE_REPLACED

Hong Kong is a huge shopping mall. Every corner you turn there is another, even fancier mall. Armani, Valentino, Rolex – you name it.  And some of the products are even real! 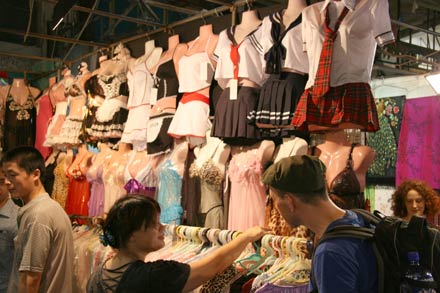 For a smaller budget and less glitz and glamor, there is an alternative END_OF_DOCUMENT_TOKEN_TO_BE_REPLACED

Taking in the View

Just enjoying the view over Hong Kong Central and Kowloon from Victoria Peak. 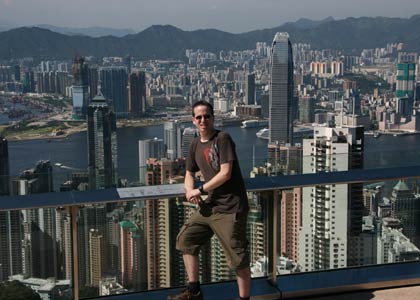 So life as contemporary nomads officially begins in Hong Kong. First stop Mirador Mansions in Tsim Sha Tsui, mecca for budget travelers. We spent our first two nights in Cosmic Guesthouse (booked from Germany) in what appeared to be a slightly spruced up prison cell with the craziest shower I have ever seen. It had 5 shower heads – like some kind of medieval torture device. Despite the amazing shower experience, we decided to switch to “Well Yet Hotel.” Still a small room, but much nicer and brighter – and, at $32 a night, the price is right in one of the world’s most expensive cities.