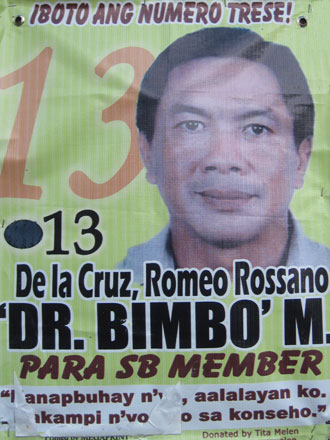 In the Philippines, the name game is always fun. We’ve heard quite a few doozies here, some of which have really left us scratching our heads.

Filipinos love double names, such as Jayjay, Jojo, and Monmon. Even less flattering double names like Dodo seem to go over well here. Names which sound like bells are even more popular, like Tong, Tatong, Bong, Bibong, Bongbong, Dong and Dingdong. Apparently, phallic associations are no problem. Just ask Dingdong Dantes, the famous actor, he’s gone far with his most unfortunate name.

There are many names which sound vaguely familiar, such as Diday (D-Day), Kulit (Cool it), and Laygo (Lego). Occasionally, these familiar names take a darker turn. Poor Talabong and Recto really didn’t stand a chance.

Cute names are always popular: Chicky, Jinky, Trendy, Glady, Baby, Boy and Apple. (Hey, maybe Gwenyth Paltrow is a Filipina. No, now that I think about it, I’m pretty sure she’s Burmese.) Occasionally, these cute names stray into the truly bizarre, such as Baby Josephine and Lord Dantem.

Well, one thing is for sure. There is no official government-sanctioned name list like they have in Germany. Clearly, Filipinos have the freedom to name their children anything they want – and they are pushing that right to the limits.

7 responses to “The Name Game”