Living Memories of the Bontoc Tribe

While transiting through Bontoc, we had the extraordinary opportunity to meet some of the older members of the Bontoc tribe. Downtown Bontoc looks like any other small town in the Philippines, with jeepney stands, hotels, restaurants, donut shops, and hordes of teen fashionistas. It’s very easy to pass through and miss any signs of the region’s cultural heritage. 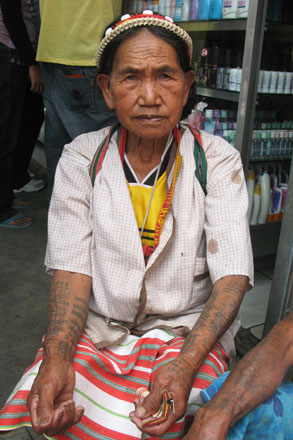 But a closer look reveals that Bontoc is actually one of the best places in the Cordillera to find the small number of older Bontoc tribes-people who cling to their traditional culture in their last years. These are the grandparents and great-grandparents of the fashionistas so desperate to escape from their tribal past.

The women in these pictures, who we saw in the central market, were born into another world. Bontoc was a large collection of tribal palm huts along the Chico River between the Ifugao and Kalinga regions. Inter-tribal warfare and head hunting were still common in northern Luzon. The Bontoc tribes-people were traditional animists who had resisted conversion under the Spanish, but American missionaries were starting to bring their belief systems into the region. 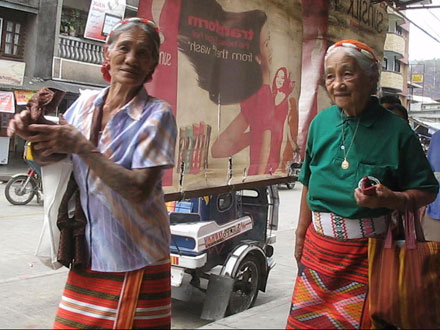 Today, only older women wear the bright red, hand-woven sarongs. Extremely old men still occasionally wear loin cloths, although we only saw two such men during our two days in Bontoc. Some women wear a very distinctive snake-skeleton hairpiece, which I found very cool, others wear a string of bone beads.

The Bontoc traditionally covered their bodies with elaborate tattoos. For women, these were purely for decorative purposes, and they are still commonly seen today. Men had to earn their tattoos by killing enemies in inter-tribal conflicts. This probably explains why we saw no men with tattoos. Although head-hunting continued well into the lives of many of the older men, tattooing would have revealed the murders which might have brought punishment from outside authorities. 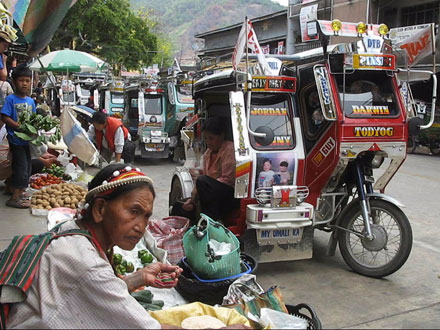 Locals comment that traditional clothing is disappearing very quickly as the last generation of old-world Bontoc dies off. Repeat visitors to the region recall that just a few years ago, such visible signs of traditional Bontoc culture were far more common than today.

I guess I’m starting to sound like a broken record with these postings on tribal culture. But it’s true, the tribal people of the world will be mostly integrated within the next generation. If you’ve dreamed of experiencing any of these cultures, you’ve got to go now.

14 responses to “Living Memories of the Bontoc Tribe”