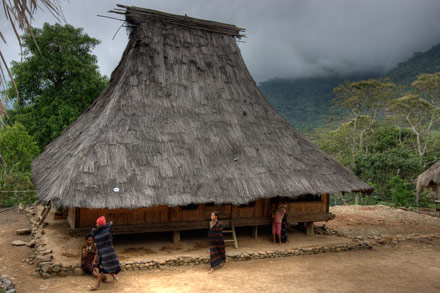 Our latest foray into the tribal cultural of Flores was a visit to Wologai, a traditional Lionese village situated on a beautifully forested volcanic ridge an hour past Ende. (The topography of Flores is phenomenal.)

Wologai is one of the few villages in the Ende district with well preserved Lionese art and architecture. Because of its adherence to traditional building practices, the village serves as the location for several of the Lio tribe’s celebrations.

The villagers were friendly yet shy, and quite adamant that we follow certain rules while walking through Wologai. We were allowed to walk through the circle of huts around the central terraced platform, but they asked us not to enter the tall ceremonial house. The cermonial house is said to contain several sacred objects including a ritual drum made of human skin. (Yikes!) 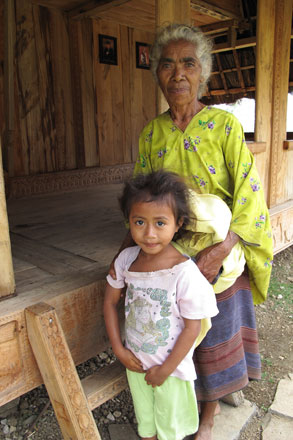 The huts themselves were quite interesting. Many window frames and major beams were carved with interesting animal, plant and abstract motifs. As with most tribes in Flores, although the Lio tribe describe themselves as Catholics, their architecture tells a much more complex story. 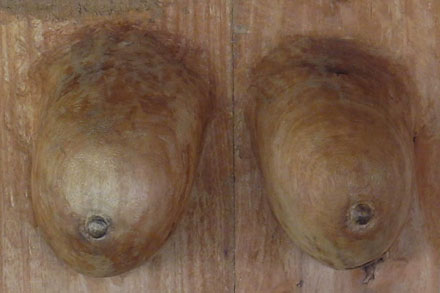 Lio villages have masculine houses keda kanga and female houses sao ria, each featuring unique layout, orientation, and design. Sao ria feature a very large pair of carved breasts near the entrance. The layout of the sao ria metaphorically represents a mother’s body, the door being the entrance to the womb. There’s a lot going on here which is not immediately obvious to the casual visitor, but animism and fertility rituals are most certainly an ongoing part of Lionese culture. Anthropology buffs can read more about the culture here (PDF). 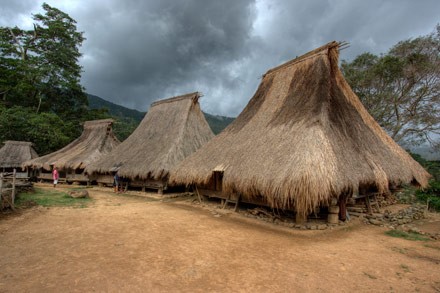 I really wish we had had more time at Wologai. The thrill of a visit to this remarkable village was in the tiny, mysterious details. And, sometimes, in the not-so-tiny details. One house had an amazing open-armed carving – I have no idea if it was just a piece of art or whether it had some symbolic meaning. More time at Wologai would also have meant more access. Casual visitors are not allowed to enter the ceremonial house, but visitors who stay a day and offer a goat for sacrifice can, apparently, enter this mysterious hut and view the sacred objects. To be honest, although I am curious, I’m not sure I would want to kill an animal to check it out. 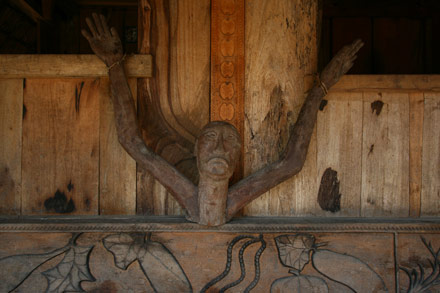 Wologai is not automatically included on every Flores tour, so if you want to experience Lionese culture, you will have to make sure it is included on your itinerary. Wologai is about 36km from Ende and is accessible by public transportation. Ask in hotels in Ende for the latest details.

4 responses to “The Lio Tribe”