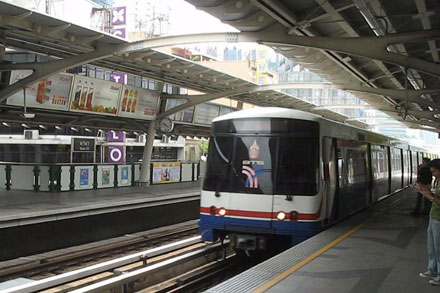 Traveling from Bangkok’s international airport to the city center has suddenly become a lot more fun. With the opening of the Suvarnabhumi Airport Rail Link in August 2010, costs for traveling between the airport and the city have dropped dramatically – at least for now. A promotional ticket for 15 Baht ($0.50) takes visitors from the airport via Makkasan SARL to Phaya Thai station in downtown Bangkok. And although the ticket price will likely be tripled to 45 Baht early next year, taking the train is still going to be cheaper than taking a bus (150 Baht) or a taxi (250 Baht). Even better than the price, travelers literally fly over the city’s notorious traffic jams. What’s more, visitors will no longer have to fight unscrupulous taxi drivers to get them to turn on their meters or pay inflated prepaid taxi rates.

In addition to the regular commuter line, a non-stop express line runs between the airport and Makkasan SARL near Petchaburi. Priced at 100 Baht, the express lines features more comfortable seats and shaves 10 minutes off the trip.  Bizarrely, the express line stops at Makkasan station and requires passengers to change to the commuter line to travel downtown to Phaya Thai.

One response to “Skytrain to Suvarnabhumi Airport”