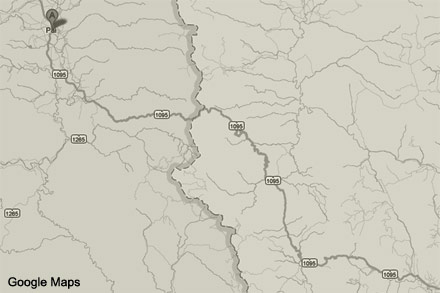 I don’t get carsick. Well, I didn’t think I did. I’ve driven across Europe, the Middle East, Central America, and Africa. I crossed North America multiple times. We’ve driven thousands of miles across Asia including the most notorious mountain regions on the continent, including Sichuan, Qinghai, Tibet, Nepal, Spiti, Ladakh, Kashmir, and Sikkim. And I’ve never gotten carsick once… until the vomit road to Pai.

Apparently, I’m not the only one. When we arrived in Pai, everyone kept asking whether we had gotten carsick on the way in. I have absolutely no explanation for what makes this road so bad. It’s well paved, quite smooth, and the bus driver wasn’t nearly as bad as the drivers in China, Nepal and India. So what is causing so many visitors, both Thai and foreign alike, to get sick? Could it be the swirling cosmic energies that have made Pai the New Age center of Thailand?Can cosmic energy make you puke?

3 responses to “Vomit Road to Pai”