Penises for a Princess

Let me start by saying that this posting is not about me, contrary to what the photo or the title may suggest. 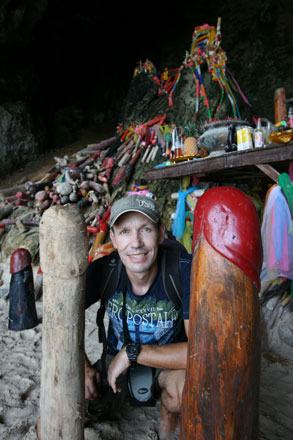 During a recent island-hopping trip, our guide Ooh told us the local legend behind the Princess Cave, a small shrine in the karst at the southern end of Phra Nang beach.

“The cave is inhabited by the spirit of a princess who killed herself there,” Ooh said earnestly, looking around to see our reactions.

“A long time ago,” Ooh continued dramatically, “her father wanted to marry her off to a man in a foreign land. During the sea journey, she was kidnapped by pirates.”

“And then?” Tony probed.

“The princess escaped and landed on Phra Nang beach where she took her own life,” Ooh stressed again. “Her spirit still lives in the cave.”

Ooh looked at the cave hopefully, “One man left offerings for her spirit – and he won the lottery! Now, many Thai people come with offerings and pray for good luck.”

“But why do they bring wooden penises to the cave?” I wondered aloud. “And why so many?”

“And why such BIG ones?” demanded the Danish woman.

“The princess died a virgin,” Ooh responded as though we were asking a ridiculously obvious question, “that’s what her spirit wants!” 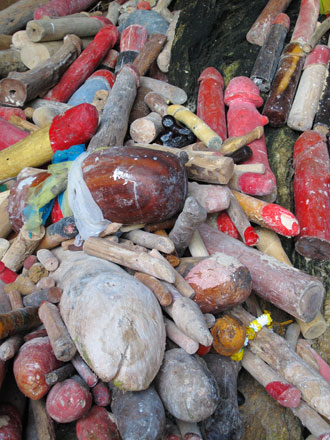 6 responses to “Penises for a Princess”