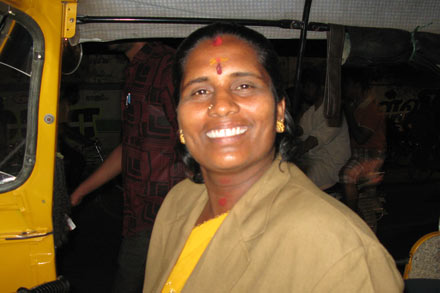 Thanjavur is an especially annoying city when it comes to rickshaw drivers. For even the shortest distance, drivers demand a minimum of 30 rupees, the equivalent of $0.60. Yes, this is an outrageous amount in India especially considering that many people only earn about $1 a day. So 30 rupees for a few hundred meters is extortion.

After an extended argument with a group of smirking rickshaw extortionists over their inflated egos, I mean prices, we finally walked away ready to tackle the walk to our favorite restaurant. As we turned around the corner, a woman in a rickshaw driver uniform approached us asking if we needed a ride. We couldn’t believe our eyes. One year in India, and this was the first female rickshaw driver we had come across.

“How much?” I instantly asked. She grinned and said it was 30 rupees. Tony nudged me in the side and told me to hop in and make this a first. Out of habit, I started haggling and was rewarded with a 30 percent discount. Yeah, I immediately liked this woman.

She was all smiles as we climbed onto the back seat. As soon as we touched the plastic-covered bench, she gunned the engine and confidently steered into the center of a three-lane road dodging honking buses, other rickshaws and motorcycles as we went.

During the short trip, we told her that we had never driven with a woman rickshaw driver before. I saw her eyes light up in the rear-view mirror, and then she deftly flew around the next curve demonstrating that she was on par with her male counterparts. When we stopped in front of the restaurant, we asked if we could take her picture. “Only if you recommend me to your friends!” she said slyly, “My name is Sita.”

One response to “Sita The Female Rickshaw Driver”