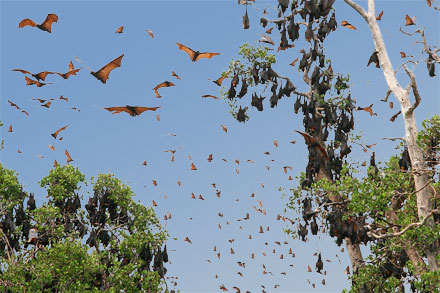 After sitting in a car for several days, we’ve decided to mix it up a little and change our mode of transportation. From Riung town, located on the northern coast of Flores, we chartered a boat to take us around the Seventeen Islands Marine Park known for its beaches, coral gardens and interesting wildlife. For $45, our motley group of four was promised a fun day out which included snorkeling, flying-fox spotting, and island hopping with a BBQ on Pulau Tiga.

First off was a visit to Pantai Ontoloe, a coastal mangrove forest which is home to the biggest colony of flying foxes I have ever seen. I can’t even begin to estimate the number of these incredible animals, but it must have been in the millions. Amazing! Every inch of every branch was taken up by bats quarreling over prime hanging spots. Many were up in the air. Circling above us in unbelievable numbers, the furry chocolate-brown creatures blackened the sky. Add to that the deafening noise of their shrieks, and it felt like an Asian remake of that Hitchcock classic The Birds. 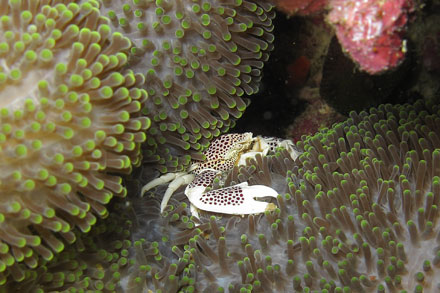 En route to Pulau Tiga (with my jaw still dropping), we stopped at a couple of places to snorkel. For those snorkelers coming from Komodo, the marine park may not quite live up to their expectations. The fish and coral life is not as plentiful, and, due to the archipelago’s proximity to a number of coastal stilt-house communities, there was quite a bit of plastic trash floating in the water (at least on the day we were there). That said, the archipelago’s underwater world is much better than anything we’ve seen under water along Thailand’s Andaman coast. Nice patches of colorful soft corals, a small school of bumphead parrotfish as well as our first juvenile crocodile fish kept us happy. We actually spent over an hour snorkeling off of Pulau Tiga while Frans and the boat captain prepared the BBQ. 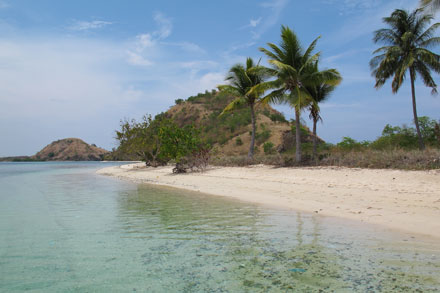 And the BBQ was worth the whole trip. Frans had gone out of his way to make this an amazing experience. From his own money, he bought two chickens in the market to add some variety to our otherwise seafood-heavy barbecue. After everything was plucked, scaled, cut and cooked, we were presented with a beautiful buffet of grilled fish, squid and chicken as well as veggies, rice, tomato salad, noodles and fruit salad. Yum!

All in all, we had a fantastic day in the Riung archipelago. Besides discovering the biggest bat colony ever, we made another AMAZING discovery… but that will have to wait until our next post. 🙂