Here Be Dragons, Too 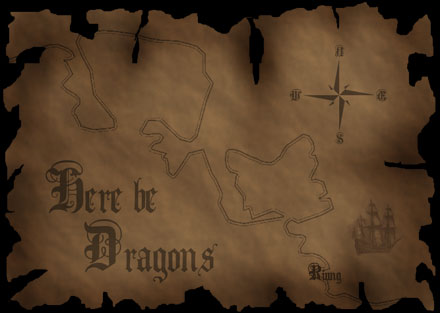 Most guidebooks and online resources suggest that the range of the Komodo dragon (Varanus komodoensis) is limited to Komodo, Rinca, Gili Motang, Gili Dasami, and the mainland of Flores just opposite Rinca. So imagine our surprise when we discovered a population of “dragons” here in the Riung archipelago as well.

Apparently, locals have known for some time that large monitors inhabit the shores of northern Flores to the west of Riung as well as some of the offshore islands. Locals suggest the government is only now taking notice of the Riung dragons’ existence. For centuries, colonists and travelers have been passing through Flores and, somehow, they seem to have missed the dragons of Riung. Could that be possible? After 30 years of dragon tourism in Komodo and several years of inflated tourist boat prices, wouldn’t the people of Riung have gotten in on the act?

I did some research online and there are very few references to the Riung dragons to be found. Almost all of the search results lead into Indonesian tour company websites. Many of these sites reference the animal as Varanus riungensis. I searched for this scientific name in several wildlife databases, but found no credible references. The few online pictures claiming to be Varanus riungensis looked exactly like small Komodo dragons, water monitors or smaller land monitors.

However, while we were viewing the flying foxes at Pantai Ontoloe, there was a government boat anchored in the bay supposedly working with Riung’s hidden dragons. Our boat captain told us that rangers of Seventeen Island Marine Park were feeding the dragons to “keep them alive.” I prefer to think that they were baiting the dragons to count them. We asked if we could go watch the feeding, but the captain responded that the dragons were “too dangerous because they weren’t used to people.” Hmmm. 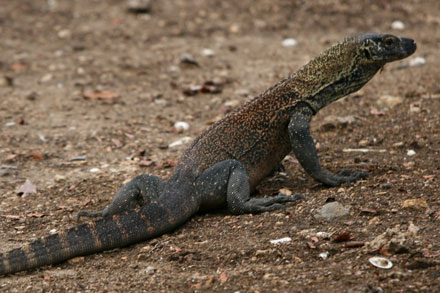 I had my suspicions about these Riung dragons. I was wondering if the people of Riung were poaching dragons from Komodo or Rinca and introducing them to Riung in an attempt to stake their claim in dragon tourism. Or perhaps, locals might be showing unsuspecting tourists large water monitors or land monitors and claiming they were a new species.

But it appears that these Riung dragons do indeed exist and they are actually endemic to the area. Although the Komodo dragon page at NationalGeographic.com writes that the animal’s range is limited to the immediate area around Komodo, I noticed a small info-graphic which showed the range extended into northern Flores as well. This caused me to go back and look again. Wikipedia makes vague reference to the newly created Wolo Tado Reserve, which I discovered is a small, relatively unknown reserve inland from Riung. How exciting! When I Googled Wolo Tado, I discovered another article in National Geographic confirming the dragons do exist in Wolo Tado. I guess National Geographic needs to consolidate its own information. I have no idea where tour companies are getting the term Varanus riungensis. If anyone knows, please let us know in the comment section below.

So why did I spend so much time worrying about whether these dragons were truly endemic to the region around Riung? Because this traveler wanted to know if this was just another tourist scam, or whether the twenty-first century could still leave us an area where giant lizards roam wild without a complete tourist infrastructure. It appears there are still many interesting things to discover out there.

2 responses to “Here Be Dragons, Too”