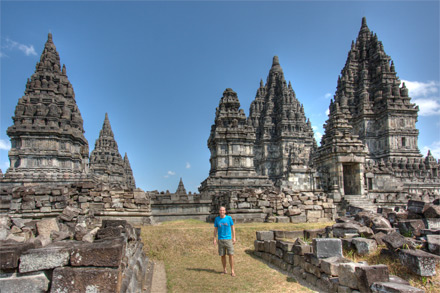 Not only is Java the site of the spectacular Buddhist temple-stupa of Borobudur, just a short distance east of Yogyakarta lies the monumental remains of Prambanan, a magnificent Hindu temple which testifies to Java’s early links with India. Prambanan is the largest and grandest of Java’s many surviving Hindu temples and is considered one of the largest in Southeast Asia.

We spent several hours wandering through the 9th-century ruins, taking in the surviving sculpture and witnessing ongoing reconstruction work. Prambanan is surrounded by volcanoes including dangerous Mount Merapi. The entire area is seismically very active and in 2006 a 6.2 earthquake hit the region killing almost 6000 people and causing significant damage to Prambanan. Five years later, the 47m (154ft) central temple is still closed for safety reasons, although you can walk around between the towers and examine the beautiful architecture from the outside.

A short walk north of Prambanan lies Sewu, an equally stunning Buddhist temple. Sewu features a different take on the Buddhist mandala design, quite different from Borobudur. The central temple was once surrounded by 240 smaller guardian temples, many of which which are now in ruins, but the monumental design still leaves quite an impression. Sewu suffered a great deal of damage during the 2006 earthquake as well, but the impressive central temple is once again open for visitors (yay!). 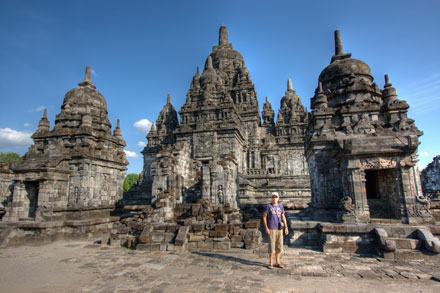 Quite miraculously, Sewu was all but deserted while we were there. As we mentioned before, the tendency for tourists to zoom between Borobudur and Prambanan means that travelers visiting outside peak times can experience the sites in solitude. I suspect that, in the rush, many people are actually skipping Sewu, which is a shame as the temple is really quite beautiful. Thomas and I sat in the atmospheric ruins for over an hour simply taking in the silence. (You don’t often get a whole temple to yourself in the 21st century.)

There is some debate among budget travelers over the high cost of entry tickets for both the Borobudur complex and the Prambanan/Sewu complex. At $15 per day for each complex, many complain that a visit to both in a single day costs much more than a day-ticket for Angkor Wat. That’s true. I suspect the high cost reflects not only the Indonesian instinct to gouge tourists but also the high cost of reconstruction and maintenance. And at least some of the money is actually going into maintenance as we saw reconstruction going on at both sites. 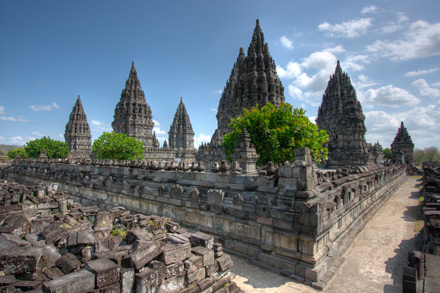 5 responses to “Prambanan and Sewu”