On Edge at Bromo 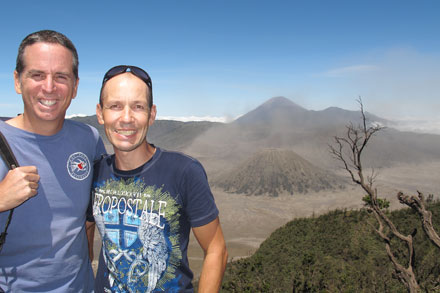 Indonesia has more volcanoes than any other country on the planet. The landscape of central Java is dominated by a series of fierce smoking cones which thrust out of the plains giving the island a mystical air straight out of the cheesiest B-grade dinosaur flick. I love it.

So it should come as some surprise that one particular mountain, Bromo, has become THE must-see volcano featured on most Indonesia itineraries. It’s not the prettiest volcano in Indonesia. It’s not the highest. It’s not the most active. So why does everyone visit?

Well, the truth is that it’s conveniently located halfway between Yogyakarta and Bali. Not to mention there is a road leading to the central crater. It’s also relatively photogenic. (Is any volcano unphotogenic?) It’s really about convenience and location more than anything else. But all that convenience has resulted in Bromo becoming one of the worst tourist traps in all of Indonesia.

Somehow the touristic gravitational pull of Bromo prevented us from bypassing it. We had heard story after story of the terrible, poorly organized tours out of Yogyakarta. They are notorious for crappy vehicles, sleazy organizers, and VERY long delays. But since absolutely everyone goes to Bromo, like lemmings, we found ourselves drawn into the frenzy.

Annoyed by the con-artists and scams connected with Yogya tours, we traveled independently to Probolinggo hoping that the situation was better there. It wasn’t. In four years of travel (including 15 months in India), Probolinggo is the singularly most dishonest location we have visited. At times, it feels like the entire city is in on the Bromo scam. Taxi drivers and tour operators conspire to fix prices at ridiculous levels. When we inquired about public transportation to Bromo, locals robotically denied the existence of such options, instead offering up a brother or a cousin or a neighbor who would drive us for an extortionate amount of money. The enormous effort that the population was putting into making us take a tour made us more determined than ever to travel there independently. By this point, it wasn’t even really about seeing Bromo; it was about bypassing the scams. 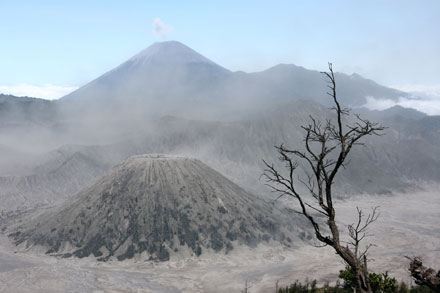 But bypassing them is not easy. When we headed out by bemo to the local bus station to investigate for ourselves, the driver actually stopped one kilometer before the station in front of a travel agency and announced, “Bus station.” The other passengers nodded in complicit agreement suggesting we get out of the bemo. But we ain’t no fools, a dozen glassed-over, soulless eyes gave them all away. “God damn it, drive to the fuckin’ bus station… NOW!!!” I responded on autopilot. This is just another day on the tourist path in Indonesia.

Once at the station, every single person there denied the existence of a minibus. They all had a friend who would drive us for an absurd amount of money. (Seriously, does anyone have a real job in this country? Or does everyone just stand around waiting to scam tourists?) We walked around in circles hoping to find at least one honest person; there wasn’t one. I had a quick meltdown and showered those around me with four-letter words. We knew the minibuses existed, we just couldn’t find them. That was because they weren’t allowed into the bus station.

Due to extremely aggressive territorial behavior by the taxi mafia, it turned out that the minibus operators were forced to park off a side street where no tourist could find them. Once we inadvertently crossed an invisible territorial line, a driver was allowed to approach us and discretely showed us to the public minibus. He tried one last rather pathetic scam, but we quickly negotiated a very good deal to Bromo. Yes, sweet victory! 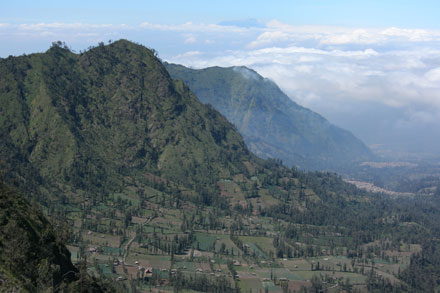 So was it worth it?

The dramatic volcanic landscape and picturesque terraced farms along the road leading up to Bromo were, perhaps, most impressive. The edge of the crater was relatively overdeveloped with scroungy guesthouses and restaurants catering to Yogya tours. Beyond the limited sprawl, there were nice views out over the dusty crater. We hiked up to the highest viewpoint on Gunung Penanjakan, an almost imperceptible rain of volcanic ash floated down around us, and stared out over central Java. To the west, a blanket of clouds lay over the plains pierced by the occasional conical peak. To the east, Gunung Semeru erupted in the distance sending smoke and ash high into the sky. Squat Bromo sat low before us belching out a continuous stream of smoggy ash. It was beautiful even in the flat light of the morning sun. To me, it would have been less beautiful in the perfect light of the rising sun because we would have had to share the viewpoint with 500 other people.

And despite the visual beauty of Bromo, I found the experience a terrible testament to the sad reality of tourism in Indonesia. Why not let people just travel? Why such elaborate games to trick and manipulate? Do all the scams really make more money than a straight-forward travel experience? So many tourists see Indonesia as the land of liars and con-artists. Is this how Indonesians want to be known?

15 responses to “On Edge at Bromo”