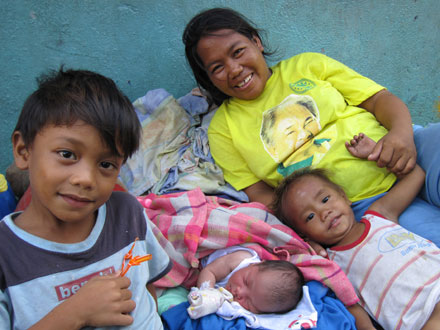 I’m currently working on a German-language article intended for publication back home on a homeless family in Manila. Because meeting this incredible family left such a huge impact on me, I wanted to briefly introduce Isabelle and Ronilo to our readers.

Writing about people living on the streets of Manila was an obvious storyline. Homelessness here is rampant. An estimated 20 percent of Manila’s population lives on sidewalks, under bridges or next to dumps. And as a tourist, you can’t really get away from street children and begging seniors. So, instead of looking the other way, I decided to do an interview with a homeless mother of 6 children.

I randomly picked a street where 20 or 30 people had made their home. At first, I was quite apprehensive. But then, holding my camera a little too tightly, I walked up to a young woman lying on an elevated wooden platform the size of a twin bed and started a conversation.

Isabelle and her family were super friendly and even after they agreed to do the interview, there was no demand for compensation. Maybe I was just a welcome distraction from everyday life. I spent an hour talking to Isabelle about everything: her six children, the fact that she wasn’t married to Ronilo, the birth of her 5-day old daughter, and about the Catholic church and contraception (or the lack thereof). Isabelle assured me that there was no contradiction in backing the church’s stance on birth control but ignoring their views on premarital sex. And, apparently, the church didn’t mind either. I learnt that it only takes a few pesos after Sunday service to buy their absolution. 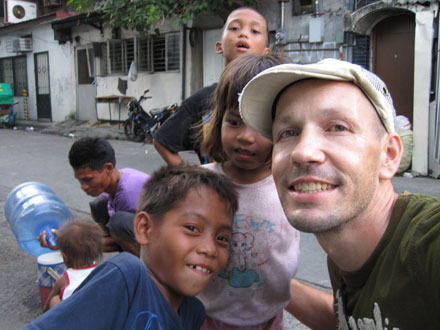 Sin-free or not, having that many children is obviously expensive. It prevents people with little or no income from climbing the socio-economic ladder and making a better life for themselves. And it affects generation after generation. I found out that Isabelle’s parents were homeless themselves and that this 29-year old woman had never lived anywhere but on the street.

What surprised me most was how calmly and frankly she spoke. They had accepted their way of life, but with no more than $4 income a day from selling trash to a junkyard, they weren’t living all that well. They just scraped by. And yet, they managed to send their 4 oldest children to school.

I was so touched by their honesty and hope for a better future for their kids, I went back later that afternoon. But not empty-handed. I brought some printed out photos of the family and a roast chicken for dinner.

10 responses to “One Family’s Story”