Remembering the Lady in the Snake Bone Crown 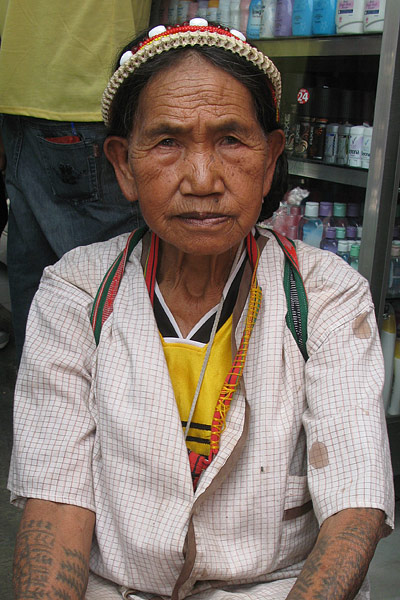 For years, we referred to her as the “lady in the snake bone crown.” We met her while we were people watching at the market in Bontoc in the Philippines. Perhaps, “met” is a bit of an exaggeration as we really couldn’t speak to her. But we sat with her as she showed us her tattoos and her snake skeleton hairpiece, memories of a rapidly vanishing age. Despite the fact that we did not know her name or really anything about her, we remembered her very well. In fact, meeting her was one of the most meaningful experiences we had in the Philippines, a country full of amazing people.

In March 2013, Janet Scott Tama wrote to us to tell us the lady in the snake bone crown was Ina Ngallowan from Tucucan, a village near the Maligcong rice terraces, and that she was still alive and doing well. Putting a name to Ina’s face was an exciting discovery for us. We had talked about her and Bontoc’s vanishing traditional culture many times.

Last week, we received an email from Tesiesakoy Chapap telling us that Ina had passed away. We can only imagine the incredible change that Ina and the other locals in the villages around Bontoc have experienced over the course of their lives. Ina was born into another world where headhunting was still practiced and tribal conflicts were a regular occurrence. She lived to see a world with packed tourist buses, karaoke bars, and Internet cafes. It is hardly comprehensible that someone could live to see such transition. What an amazing life!

8 responses to “Remembering the Lady in the Snake Bone Crown”