Abba was wrong, it’s not necessarily a rich man’s world. So how can you finance your next intercontinental extravaganza? It’s not as difficult as you might think. The only trick is, you’ll have to spend some money to make some money. 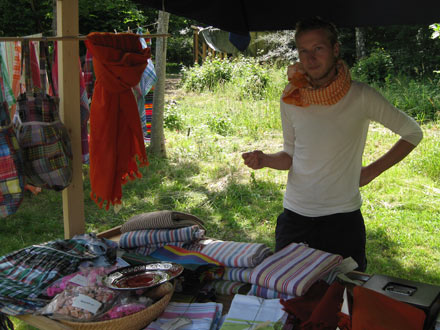 Our Swedish friends Emelie and Carl, who we met while traveling in India, had the brilliant idea to buy Indian textile items that would appeal to Westerners and then sell them in Sweden. During a recent trip to Calcutta, their entrepreneurial side quickly took over and they went shopping on a big scale. Scarfs, bedspreads, handbags, shawls, and other decorative items. I would have had a lot of fun with that.

But then came the shipping. Sending stuff from India and having to deal with the post office can be quite intimidating but once you get the hang of it, it’s not as scary as it looks. Just make sure every package is sewn into white linen – that’s a good start. And then pray to Hanuman that your shipment will make it.

I just recently contacted the two Swedes, and they sent me the latest update on their successful sales business. The pictures show Emelie and Carl shopping and shipping the goods in India, and then reselling them on the island province of Gotland, a popular holiday destination in Sweden. Good choice, people in vacation mode are much quicker to spend their money. This is important, especially if you want to finance your next trip and continue your nomadic lifestyle. 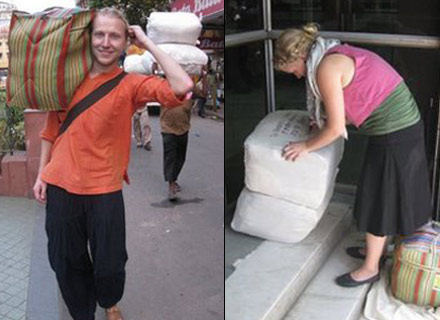 Importing products from India is a great idea because goods there are comparatively cheap. Having said that, many other third-world countries offer similar opportunities. Be it baskets from Ethiopia, silver jewelry from Morocco or weavings from Guatemala, there’s a definite market for ethnic art in the West. You just need to know what your potential customers are looking for.

But before you go out and spend your last cent on exotic knickknacks, make sure you’ve thoroughly investigated your country’s policies on importing merchandise. Even for a small number of items, you may have to pay import duty, sales tax, and, in the end, income tax.

Well, you don’t want to run into trouble with the law, or, instead of doing souvenir runs, you might find yourself on the run.