Sane Visitors to Indonesia don’t necessarily associate the name “Kuta” with pristine nature and tranquility… or do they? 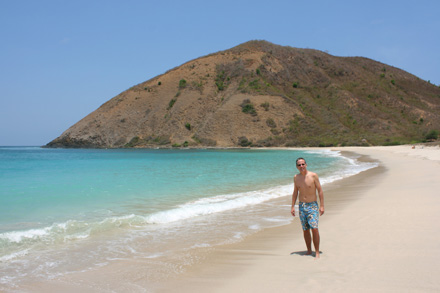 Kuta in Lombok has the same name as Bali’s (in)famous tourist hub, but Kuta Bali and Kuta Lombok have very little in common. Although both are known for epic waves and endless beaches, Kuta Lombok lacks the hordes of tourists and horrific overdevelopment which plague its tacky sister city.

Although the town of Kuta, Lombok itself is nothing to write home about, the small fishing village turned tourist center sits along a vast stretch of undeveloped coastline featuring stunning beaches and quaint rural villages. And despite its proximity to Bali, the postcard-perfect white sands here in southern Lombok are almost completely deserted.

Perhaps, that is somewhat due to the appalling roads in the area. The potholed nightmare that leads through the hills to isolated Mawan and Mawi is verging on a deathtrap. We cautiously inched our moped up and over the steep stretches between Kuta and Mawan praying we wouldn’t wipe out. At times, when the windy road got too steep, Tony got off and walked while I maneuvered the slipping vehicle through a maze of potholes, sandy patches and gravel. After an hour of hard work, the sight of Mawan cove just might have made up for all that trouble. 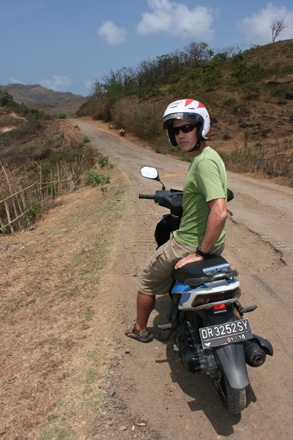 What struck me immediately was the surreal color contrast between the turquoise water, the white sand, and the brown sunburnt hills – and the fact that the beach was almost empty. The only permanent residents we saw were from a tiny fishing village at the end of the beach. It can’t really get better than that. Or can it?

Tanjung Aan, a vast curving bay to the east of Kuta, may just beat Mawan. The road leading to the idyllic beach hideaway is via a somewhat sealed road, which shouldn’t kill most people. Although the road is far from perfect, it is definitely safer than the roller coaster to Mawan. And the beach… 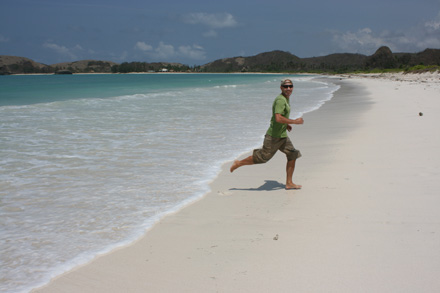 The beach is absolutely gorgeous. The 2.5-km white-sand beach is backed by low, grassy dunes and cliffs and features a huge rock viewpoint that juts out into the water. (Ignore kids asking for an “entry fee,” they are just hoping for stupid tourists.) Yes, there are a few thatched warungs which serve up quick eats and coconut drinks, but there are no hotels, highrises or crowds for that matter. There’s something so magical about finding kilometers of undeveloped, white-sand beach in the 21st century, and so close to Bali, it is hard to put in words. But, alas, that’s all about to change.

As with white-sand beaches across the world, developers are drooling to get their hands on southern Lombok. Dubai investors had plans to turn Kuta into the next Nusa Dua, a large high-end development which stretches across southern Bali. But rumors suggest they pulled out of the $600 Million project citing Indonesian sluggishness and incompetence. (Perhaps, there’s an advantage to lazy bureaucrats after all.) While Dubai may not have had the patience, others will certainly pick up where they left off. And the opening of the new airport close to Kuta in September 2011 is probably an indication of what’s to come…

One response to “Beaches of Southern Lombok”