For weeks, we have been dreaming of some rest and respite in luxuriously decadent Bangkok. Sushi at Fuji, the latest 3D films in digital perfection, sinfully delicious chocolate cake at Siam Paragon, a mega-brunch at Taling Chan. However, as many of you have probably seen in the news, the city is going through a rough patch as tens of thousands of protesters challenge the authority of the current government by occupying sections of the city including portions of the old city and the streets around Central World Mall. The latter location is just a short walk from the apartment we stay in when we are in Bangkok. And both locations are quite relevant to tourists visiting the city. 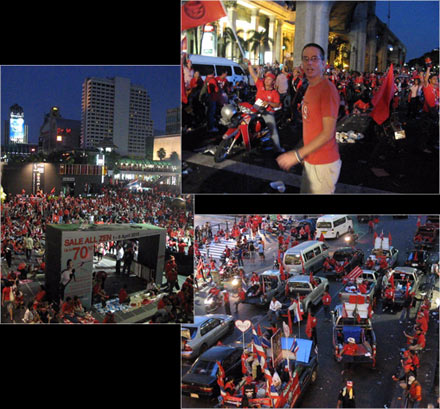 During our stay in Bangkok, the Red Shirts relocated into the downtown area shutting down the enormous commercial centers from Siam Discovery along Sukhumvit Road all the way to Central World. For those unfamiliar with Bangkok, it would be like rolling into New York and shutting down 5th Avenue. Protesters were zipping up and down the streets broadcasting opposition slogans from loudspeakers mounted on their cars as everyone from 10-year-old kids to eighty-year-old grandmas made their way to the protest area. Dressed in red, the crowds continued to grow for several days until a sea of people filled the streets. It was quite a spectacular site.

Initially, the atmosphere of the protests was quite festive; it almost felt as though a huge street party was taking place with music and BBQ stands – the protest food was great. Thomas and I walked through the area several times taking it all in. But clearly millions of dollars a day in revenue were being lost as everything from supermalls to luxury hotels were forced to close. Tourists and business people began to flee the center of the city fearing potential conflict between the Red Shirts and the authorities. As the days moved on, the tensions grew as the protesters became restless and government forces felt increasing pressure to reopen downtown Bangkok. We started to steer clear of the area realizing problems were brewing.

Although many of the international news broadcasts were critical of the occupation of the city center, we only encountered support and approval of the Red Shirts. All of the Thais we talked to seemed to feel the protests were a necessary push towards a more democratic government. While news outlets often refer to the protestors as supporters of Thaksin Shinawatra, most of the people we talked to did not really support the ex-prime minister but rather opposed the way the current government came into power. To bring yourself up to speed on the politics behind the current protests, check out the Wikipedia article on the subject which breaks it down relatively well.