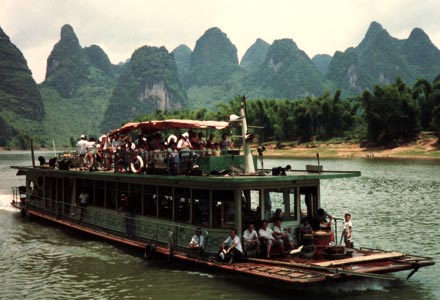 Photo of Yangshuo taken in 1987

Twenty years ago, I stepped off a tourist boat into what had to be the most beautiful place on earth – Yangshuo, a tiny village along the Li River in the Chinese province of Guangxi. The village represented the perfect vision of China: spectacular karst mountains shooting out of emerald green rice fields, old men on bamboo rafts using trained cormorants to catch fish, and water buffaloes strolling through the streets.

A few years later in 1991, I returned to the village to discover some subtle, yet appealing changes. The food had improved and the locals had set up a small tourist market selling Ching dynasty trinkets and some locally made batiks. A hand full of backpackers enjoyed banana pancakes in make-shift restaurants lining the dusty streets. The town was still perfect.

And then life kept me away from paradise for 16 years. I kept thinking about the beautiful village, but what I didn’t know was that it was gone.

Sixteen years is a long time. But in the China of the 21st century, it is more like a hundred years. The little village became part of China’s push towards modernization. And apparently, that push leaves no room for restraint.

The real cormorant fishermen have been replaced with the “cormorant fishing show” for tourists. The streets are full of honking buses and foreign and Chinese tourists bargaining over T-Shirts with Harry Potter, David Beckham and Osama Bin Laden. The once quiet village is now a city with a population of over 300,000 people. It has ATMs, a Kentucky Fried Chicken, tourist resorts, breakfast cafes, discos with dancing girls and laser machines, and chaotic madness.

The only thing that remains is the stunning landscape defying the apartment complexes and urban sprawl.

2 responses to “Yangshuo Then”