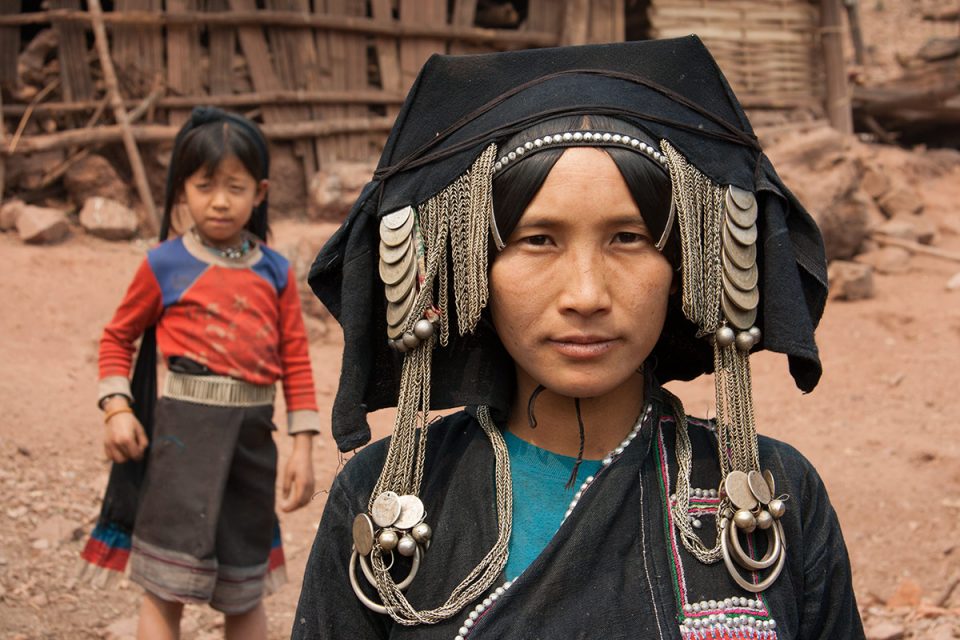 The first time I went to Thailand in 1990, I had the opportunity to trek through portions of the North to visit many of the hill tribes. At that time, traditional clothing and culture were still very intact. Yes, there were already too many tourists, but there was still much to be seen and experienced especially in the remote regions along the borders of Myanmar and Laos. The markets of the Golden Triangle were filled with a mix of exotic tribal people donning colorful garb buying and selling goods in a dozen languages.

The obvious stars of the markets were the Akha, a group whose unique culture, blood-red betel nut stained teeth, and over-the-top headdresses made them one of the most recognizable tribal groups in the world. I had hoped to share this amazing culture with Thomas during our visit to less developed Laos in 2010, but that proved a bit more challenging than I had thought. 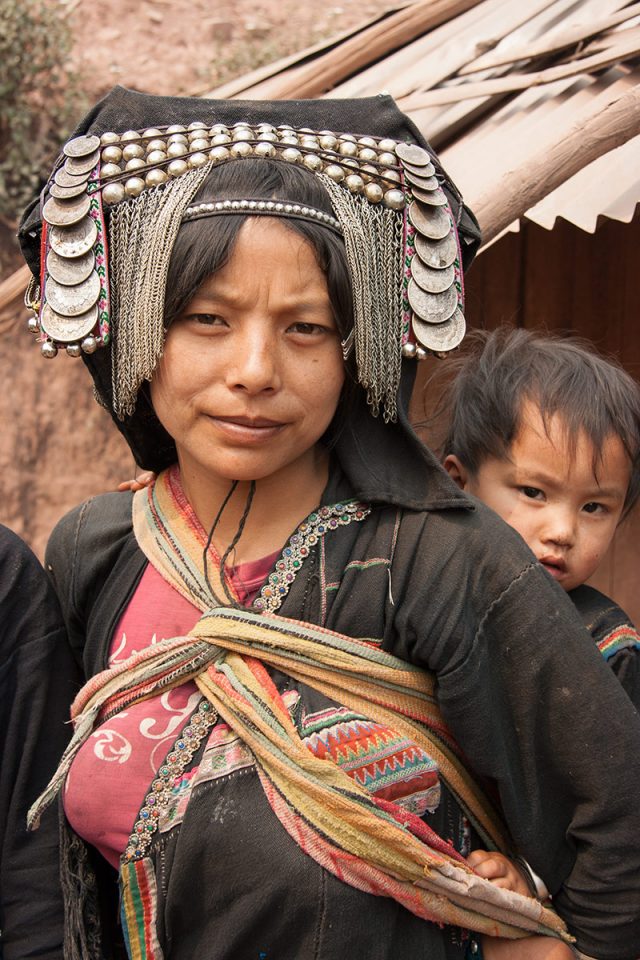 The tribes of Southeast Asia are being assimilated at an astounding rate. As Chinese and Vietnamese traders bring low cost clothes into remote Laotian villages, tribes are less motivated to produce their labor-intensive traditional attire. Moreover, trendy Thai television shows tempt traditional peoples with visions of the high life.

One quick step towards that seductive modern life is to sell off traditional jewelry, headdresses, and religious artifacts to collectors and tourists who are scouring the region for what little remains. As with my visit to Thailand years before, our quest to experience traditional Akha culture in Laos took us to the remotest border regions of the country. 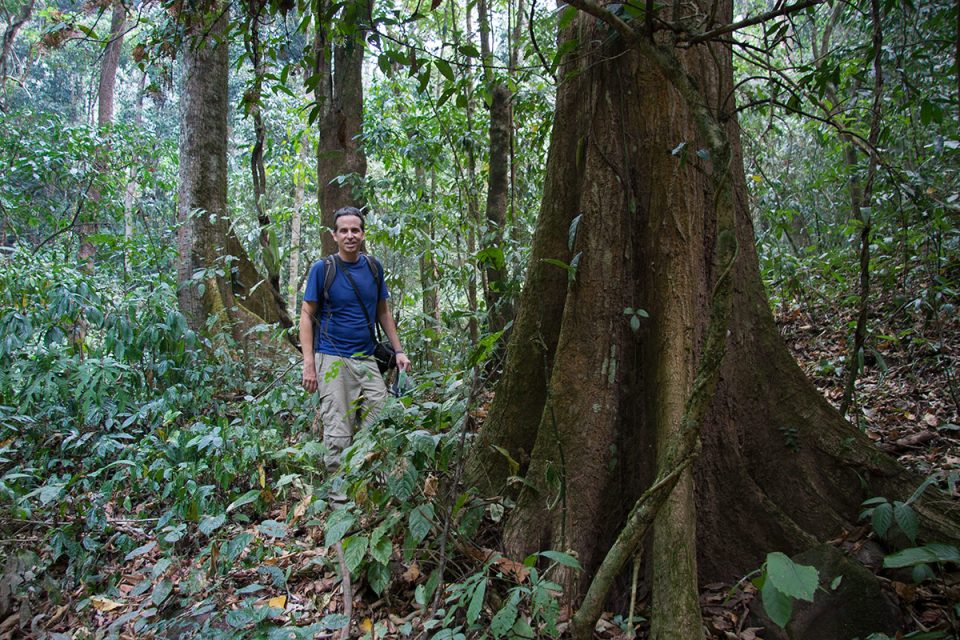 And after much searching, we found them. Quite unlike the tourist shows of northern Thailand and Western Laos, the remotest regions of Phongsali province recalled another age. But even there, traditional life was disappearing quickly as remote villages were being relocated to the major roads and the government attempted to bring tribal lands under control. 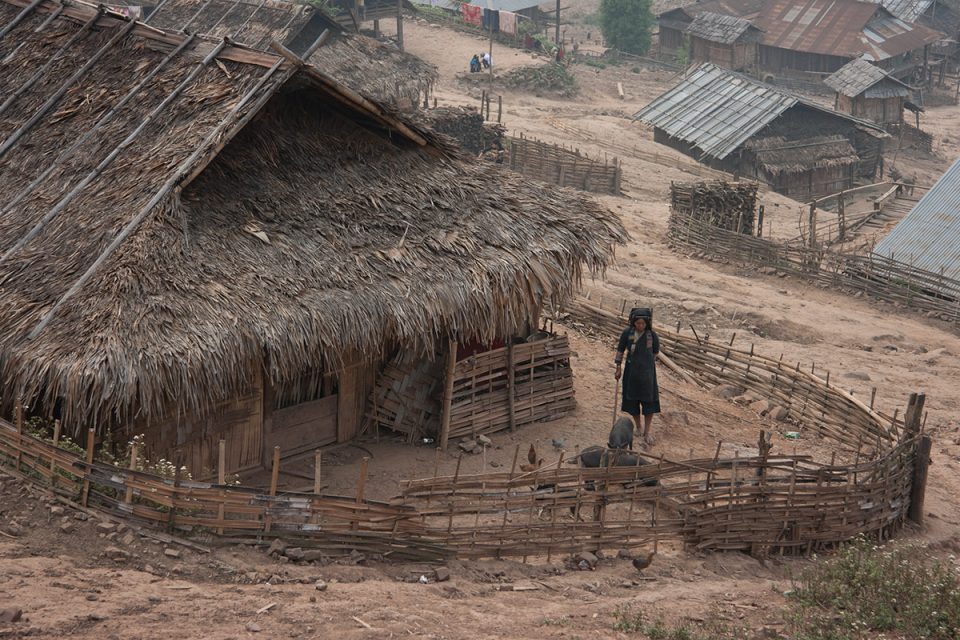 Thomas and I, joined by German trekker Burkhart, hired our amazing guide Touy, a member of the Phu Noi tribe, to lead us through the jungle up to remote Akha mountain villages accessible only on foot. I was a bit worried when we stopped outside the first village to call on a cellphone to ask permission to enter. A cellphone? But as we approached the chief’s house, it became clear that we had found the traditional culture we were seeking, with a few rather incongruous 21st-century touches. 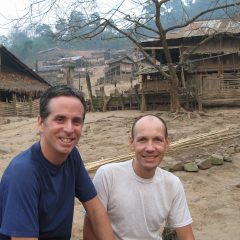 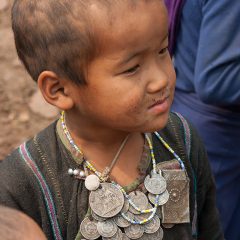 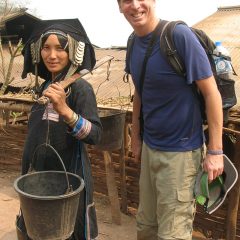 We entered through an Akha spirit gate, meant to ward off evil spirits, and wound our way down the eroded path through simple stilt houses. Dozens of domesticated boar and chickens scuffled across our path as locals eyed us from their doors and windows.

Most men and children wore tattered western clothing, but married women were dressed in traditional black tunics with touches of colorful embroidery and impressive silver Akha headdresses. The tunics in this particular sub-group of the Akha were specially designed with a slit that allows the right breast to hang out freely. Women traditionally greet each other by touching each others breasts. I wouldn’t try that in mainstream Lao culture if you want to keep your hand. 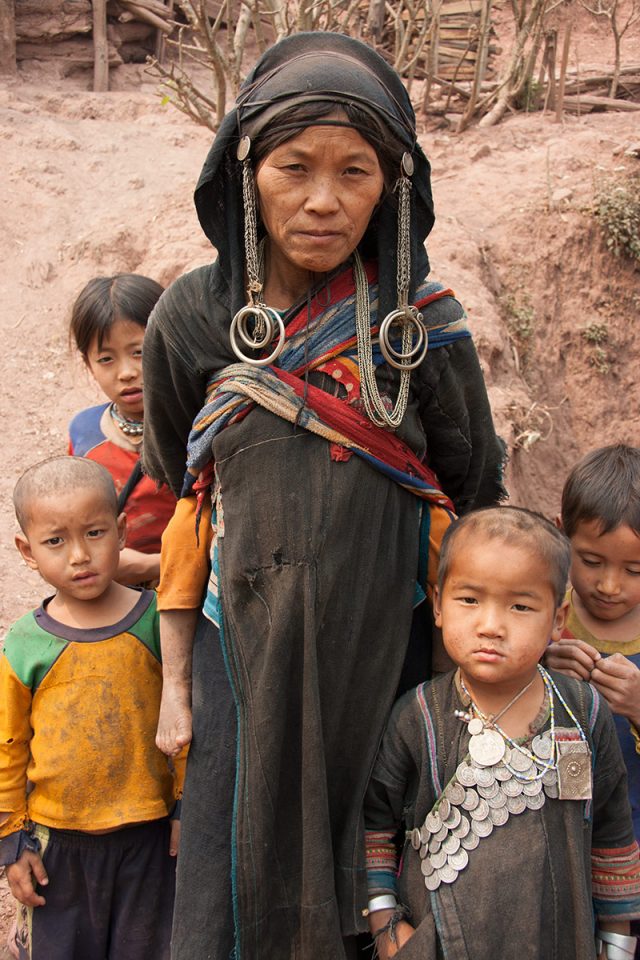 Taking pictures was quite a challenge. The chief insisted I photograph him in a ridiculously oversized black suit jacket, but refused to allow me to photograph any women. When they revealed the Lao government was going to relocate the entire village to a major road the following year, I realized the village’s days were seriously numbered.

Eager to photograph a little of the vanishing Akha’s lives, I negotiated for around forty minutes before receiving his permission to take pictures. Interestingly, the women put T-shirts on under their tunics before I was allowed to photograph them. I don’t know if they wanted to hide their breasts or if, like the chief, they wanted to put on “their best clothes” for the pictures. 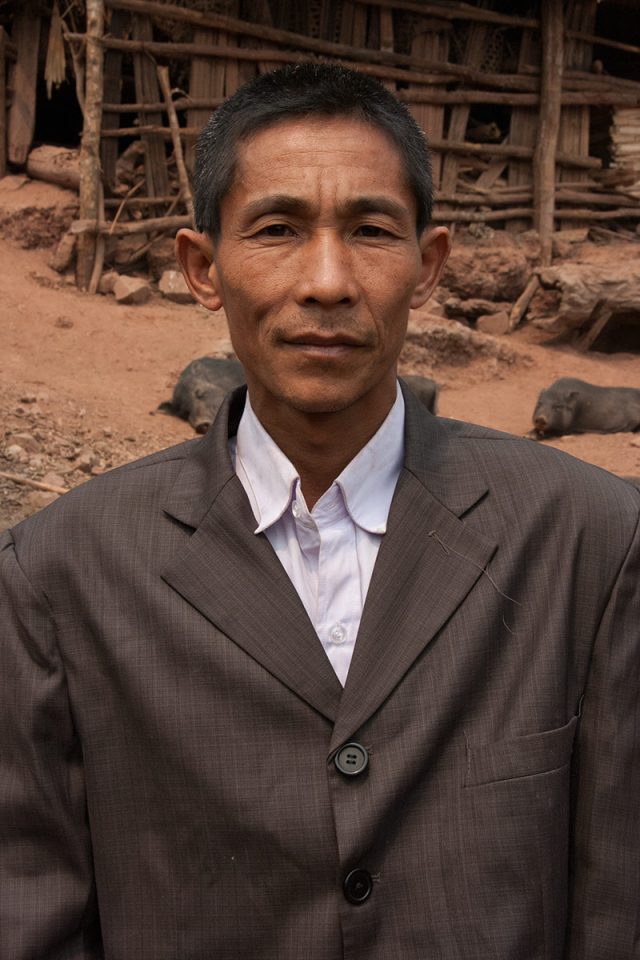 We overnighted in a second village three hours walk away. Again in the chief’s house, we ate with the family and studied the bizarre blend of stone-age utensils and high-tech gadgets in the hut. Remarkably, the village had electricity provided by a communally purchased mini-hydroelectric generator. It was just enough current for each hut to power a single light bulb dangling from the ceiling. Considering the capital of the state only had three hours a day of electricity at the time, I was quite impressed.

The light bulb in our hut had a small electrical device attached to it that flashed and blinked like some futuristic disco ball. I asked what the device was and discovered it was a Chinese universal battery charger, priced at under one dollar, that the family was using to recharge their cellphone battery. Evidently, the disco effect was for tribal entertainment purposes only. 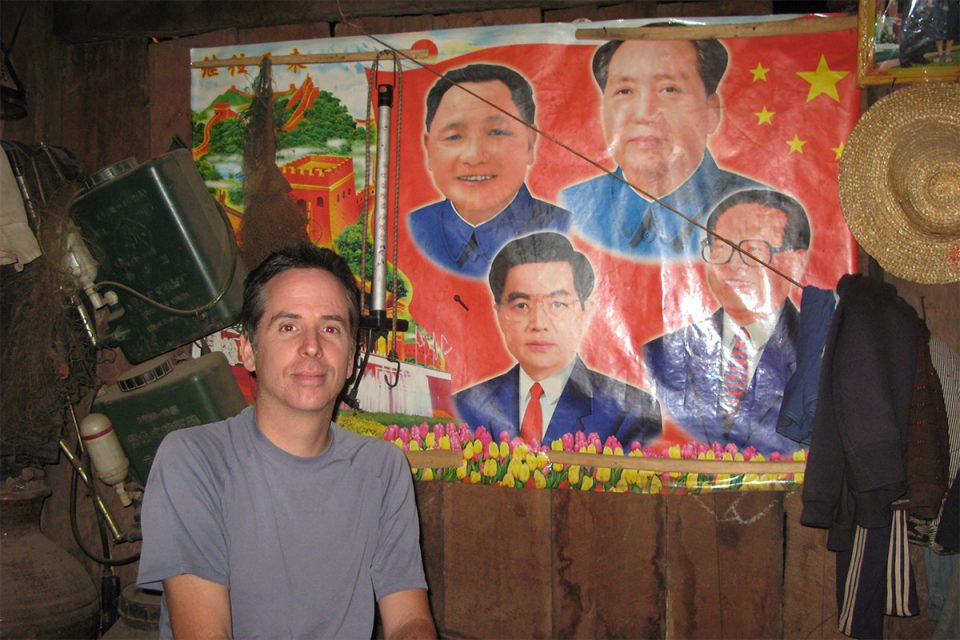 The wooden and rattan walls of the hut spoke volumes about the historical and cultural roller coaster ride the tribal people here had experienced. Behind me, the wall featured a poster of Chinese Communist leaders. Off to my left, Marx and Lenin stared back at me.  I asked our guide Touy if he knew who these people were. He answered that they were famous presidents, apparently completely unaware of the ideological associations.

Off to the right, I noticed photoshopped pictures of the chief’s family standing in front of a monstrous three-story western-style house. I marveled at the chief’s wife with her silver headdress and right breast hanging out standing in front of a ridiculously grand three-car garage. Apparently, Chinese traders passing through had sold these photo-fantasies to the locals. How odd, a pantheon of communist leaders next to a consumerist fantasy. Apparently, the Akha are as consistent as the rest of Laos – or the world for that matter. 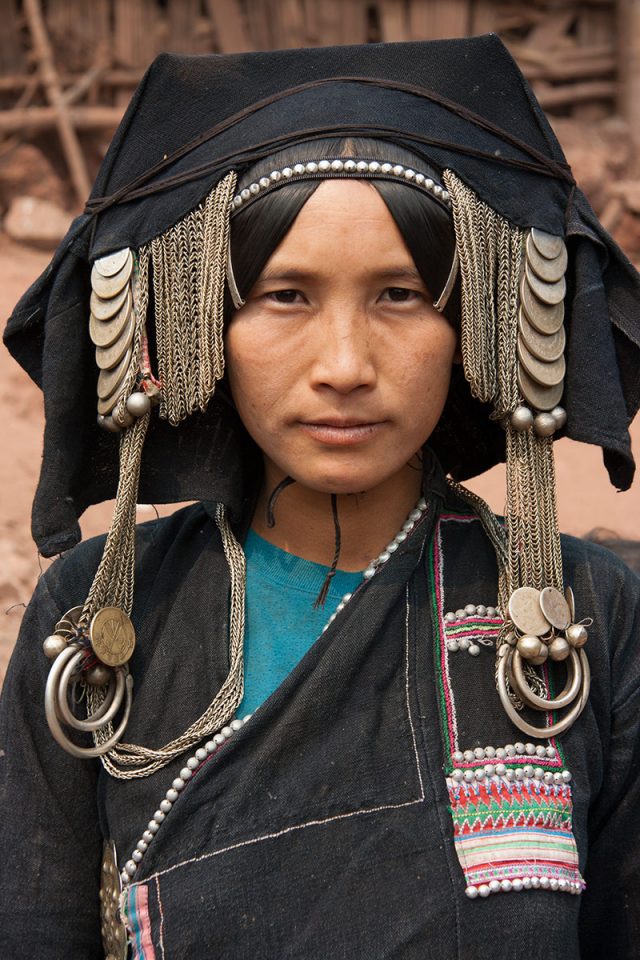 But these odd contradictions were precisely what made our visit to the Akha so moving. Witnessing the realities of their struggle to adapt and redefine themselves was enlightening to say the least. When we visited, the Akha had no toilets, or even the concept of going to the toilet in one place; they simply relieved themselves in the bushes next to their houses. And yet, they pictured themselves living in mansions with three-car garages. They cooked over open fires, ground spices with stone mortar and pestles, and farmed traditional fields with centuries old tools, all while chatting on their cellphones. Humans are such strange creatures. 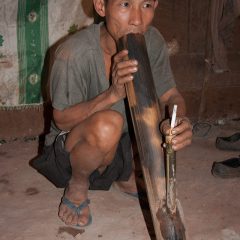 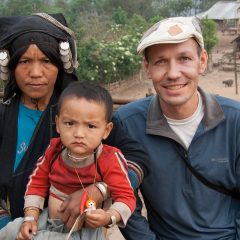 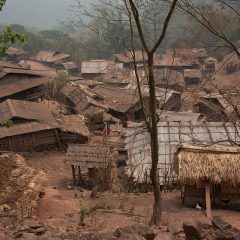 Then again, perhaps the shifts and changes in Akha culture highlight a much subtler process we all experience as we continue to evolve in an ever-changing world. After all, when I first visited Thailand so many years ago, I wasn’t typing on my laptop or uploading content to my blog. I guess we all evolve.

But that evolution sometimes means the end of ancient ways of life. Since we first visited the Akha in the mountains outside Phongsali, the villages we visited have been forcibly relocated and much of the surrounding forest has been destroyed. New, upgraded dwellings have been built on Chinese-built roads,  clothing has changed, and the Akha are being increasingly integrated into mainstream Laotian life. The story is the same as what has happened to the Akha in Thailand and China, and what will happen in Myanmar. It’s sad, but all people everywhere have experienced this transformation at some point in history. 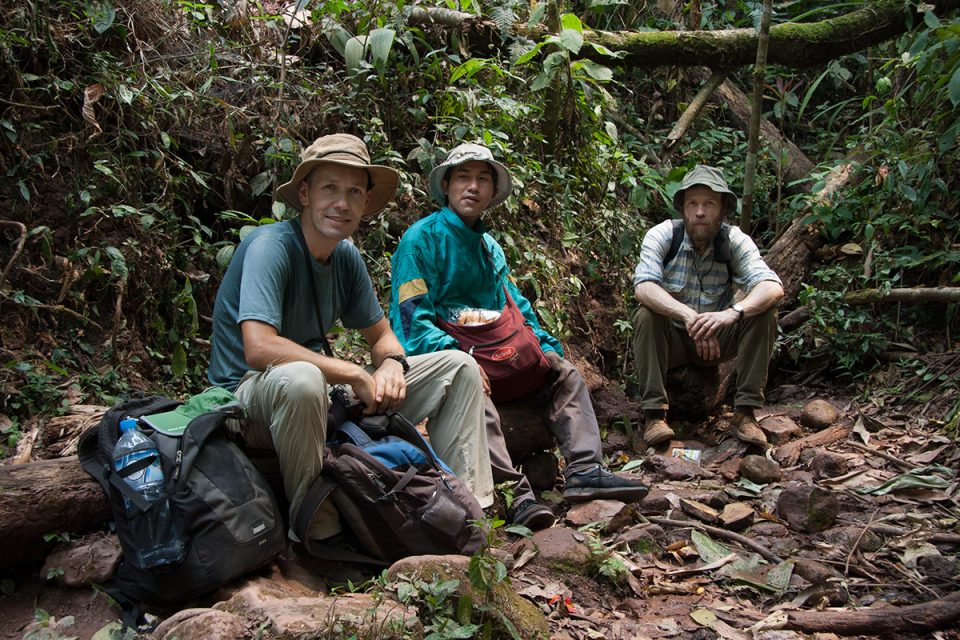 5 responses to “The Akha”