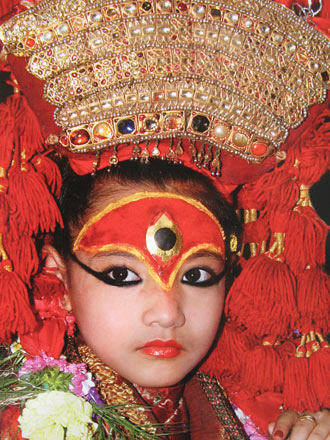 There are countless deities in Nepal which are worshipped as images, statues or symbols but one of them is for real: the living goddess Kumari, a young girl who resides in a palace in Kathmandu.

In reality, there are several living goddesses around the valley but the Royal Kumari of Kathmandu is the most important. She attends many ceremonies and festivals each year, Indra Jatra festival being the most spectacular during which the Kumari is worshipped traveling through the city on a huge chariot over a three-day period.

But the life of a living goddess is not all glitz and glamor. The Kumari, a girl as young as four years old, gets chosen from a particular caste of gold- and silversmiths. She has to meet 32 strict physical requirements ranging from eye color and sound of voice to the shape of her teeth. Normally, there is more than one candidate so all the girls are gathered in a darkened room which is decorated with 108 hacked-off buffalo heads.

As if this weren’t scary enough, dancing men in horrible masks try to frighten them even more. The girl who remains calm during the whole ordeal is chosen to be the living goddess Kumari. (It’s assumed that only a goddess would remain calm after all that.) She is then taken from her family and placed in a palace in Kathmandu where she is raised by caretakers. With her first period, her reign suddenly ends. Having become a mortal once again, she is sent back to her family, whom she may not even remember.

The consequences of having been a Kumari even carry over into her adult life. It is said to be unlucky to marry an ex-Kumari. So not only are these girls deprived of their childhood, many of them also end up alone and impoverished without a family to support them.