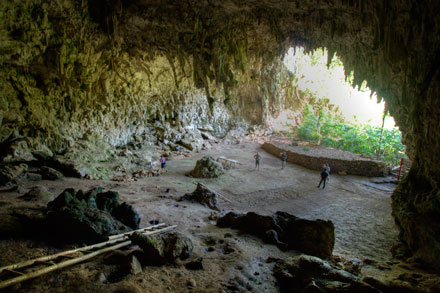 Our first stop leaving Ruteng was the Liang Bua cave, which made headlines around the world in 2003 for the discovery of tiny Homo floresiensis, otherwise known by the media as the “Flores hobbit”. Since their discovery, the bones of H. floresiensis have been the subject of intense scientific debate: does this population of three-foot-high people represent a species distinct from modern humans, or do they represent a population of humans with unique genetic characteristics or disorders?

As of 2012, the general scientific consensus seems to be that the Flores hobbit represents a distinct species. Archaeological evidence shows that the mysterious Flores hobbit lived until 12,000 years ago making it the last non-modern human to walk the planet. Beyond archaeological evidence, legends of the Ebu Gogo people, a tribe of tiny, hairy, linguistically challenged people, who are said to have survived in remote parts of Flores until the late 19th century, kick imaginations into overdrive. This is some pretty cool stuff.

So it’s, perhaps, not surprising that the Liang Bua cave has become somewhat of a pilgrimage site for science buffs. We showed up hoping for the inside scoop on one of the 21st century’s ultimate science stories. Instead, we got a short course in Indonesian incompetence and dysfunction. Upon arrival, we were made to pay a “donation” and hire “a guide”, who led us 100 ft (30m) along a road to the cave, pointed at the dirt, and said, “They found the hobbit there.” The end. No information, no display, just a hefty $10 charge. (Or at least that’s what they wanted us to pay.)

What the guide ended up getting was a GRAND Tony lecture on the importance of the site and the absurdity of not being able to do anything but charge a fee. (The lecture was loud, involved visuals, and lasted 10 minutes.) I could not understand why such an important site would be so neglected – until I did a little research. 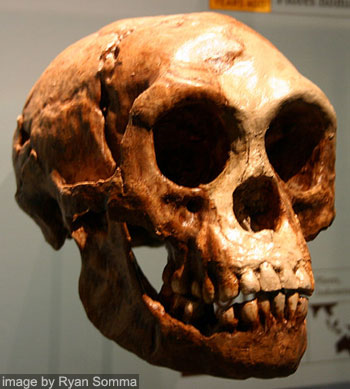 The discoveries at Liang Bua and the resulting debate and scandal don’t paint a pretty picture of Indonesia. The concept that H. floresiensis was a distinct species was vocally opposed by Teuku Jacob, an influential Indonesian paleoanthropologist and nationalist who had been an active participant in the Indonesian revolution. Jacob argued that H. floresiensis was actually a population of microcephalic humans and not a new species. In 2004, Jacob removed the H. floresiensis remains from Jakarta’s National Research Center of Archaeology for his own research, some suggest without proper permission. Three months later, the remains were returned with serious damage including long, deep cuts caused by a knife used to remove a rubber mold and, most incredibly, the jaw bone which had been snapped off and glued back on.

Beyond the damage to the remains, in 2005 the Liang Bua cave was closed to researchers. BBC reports on the closure suggest that the Indonesian government had closed the caves to prevent foreign researchers from disproving Teuku Jacob’s theories on the Flores hobbit. Wow, that certainly explains the complete lack of archaeological information offered up to us by guides at the cave.

The debate, the science, and the scandal read like something out of a Michael Crichton novel – it’s immensely interesting. Definitely take a peek at Wikipedia’s extensive and very up-to-date article on H. floresiensis.

3 responses to “The Flores Hobbit”