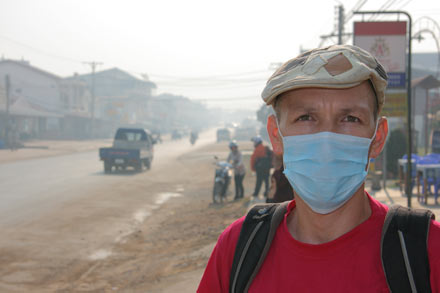 The air over Northern Laos is atrocious. The blue sky has been concealed by a thick blanket of gray smoke due to widespread and often illegal field burn-off. This is the worst air pollution Tony and I have experienced. It is so bad, in fact, that flights in and out of Northern Laos have been canceled. The source of the daily “fog” becomes apparent at night when the fires in the surrounding hills start flaring up. Watching the flames and hearing the crackling is strangely mesmerizing despite the devastating effects.

The smoke is quickly effecting our health. Our eyes are burning, we are sniffling, and we are coughing like crazy. It would be a good time to leave. But where to? Laos is not the only nation in Southeast Asia practicing slash and burn agriculture. With a combined mega-cloud of thick acrid smoke hovering over Myanmar, Northern Thailand, Laos and Northern Vietnam, there’s no quick way out.

The worst thing is, this year’s burn-off is no exception. The slash and burn practice repeats itself every year from February to May at the end of the dry season. Just think about the impact on the environment. While the developed world is taking steps to reduce carbon emissions, Asia is making up for it. Before you dismiss the “petty” air pollution and point your finger at the developed world, you need to know that none of the trash burning and field burn-off in India and Southeast Asia is being counted. According to one regional specialist we met, this kind of pollution simply doesn’t exist when it comes to calculating a country’s emissions. It’s ludicrous. Once you’ve seen the air in Asia, and I mean see, you’ll understand.

On the upside, we’ve been having the longest sunsets. The sun turns bright red about two hours before it actually sets. Every day, we watch this spectacle with teary eyes hoping for a good rain but, instead, it just keeps raining ash. 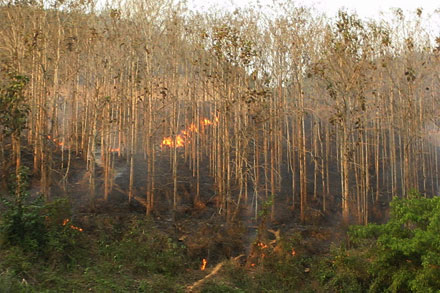 2 responses to “Not Just Blowing Smoke”