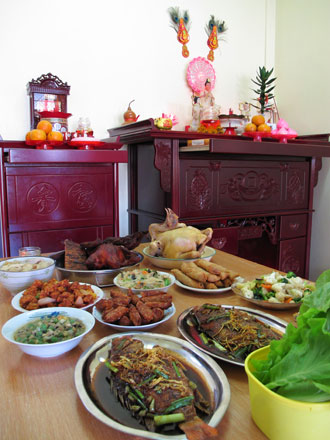 For years, Ken has been talking about the amazing food back home. So when Ken and Freda announced their plans to visit Ken’s family during Chinese New Year, we were immediately on board. What better time of year to visit than during a holiday which is all about eating.

When we walked into Ken’s oldest brother Jimmy’s home for the celebrations, I wanted to jump in delight. A table covered with a dozen different dishes had been placed in front of an altar in the living room. It looked promising. But I had to hold back, it wasn’t yet time to eat. 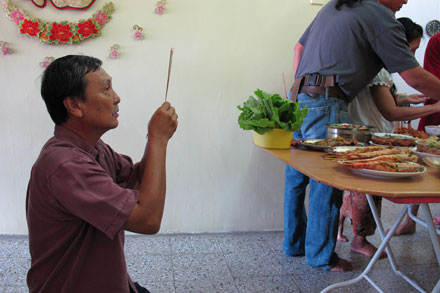 Ken’s brother Ken offers incense to the ancestors. (Our Ken’s real name is Fatt. See Tony’s comment below after the post.)

Fifteen members of the immediate family shook our hands and welcomed us euphorically. There were so many different languages being spoken at the same time, it was dizzying. While everyone spoke Toishan to Ken’s mom, the brothers and sister conversed in English and Toishan. Some of the sisters-in-law were addressed in Cantonese or Hokkien, others only in Mandarin. Suddenly, I felt so limited with only English and German. Luckily, Tony was able to speak some Mandarin with those family members who weren’t too comfortable with English, let alone German. 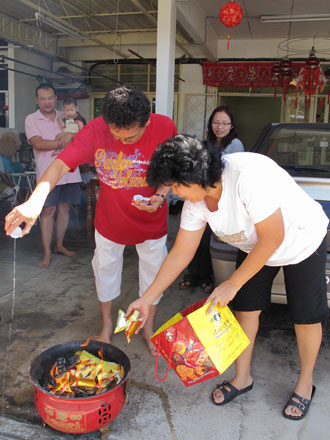 Ken’s brother Steven and his wife Sharon watch brother Jimmy and his wife Yim burn spirit money for the ancestors.

After a round of tea, I started getting antsy. Glancing at the food with one eye, I suddenly noticed the family doing rituals. Some family members lit incense sticks and prayed in front of the altar while others burnt spirit money outside as an offering to the ancestors. But before the feast could start, the ancestors had to be asked for permission. This was done by tossing up two wooden, crescent-shaped blocks. At first, they both landed with the flat part up. Apparently this was not the desired result as they were flipped again. This time, they both landed with the flat part down. Again, no good. How much longer could this go on? It was only a matter of probability. Eventually, the pieces landed favorably, one flat, one rounded. There was a cheer and everyone quickly moved into the dining room where the table was set. 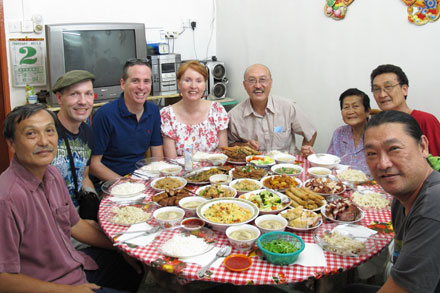 I couldn’t believe my eyes. A total of sixteen dishes, not including dips and sauces, were pretty much filling up the whole table. It smelled wonderfully of garlic and ginger. Clearly, the family had gone out of their way: steamed fish, boiled chicken, tofu, fried duck, Chinese sausage, fried taro, bean curd soup with oysters, deep-fried spring rolls, different rice and noodle dishes, tiger prawns, and the list went on. There was so much food, in fact, that even after we all had eaten ourselves into a stupor, it looked as though hardly any of the food had been touched. I don’t even think, I had space to try each and every dish. That’s what I call a successful Chinese New Year’s feast. 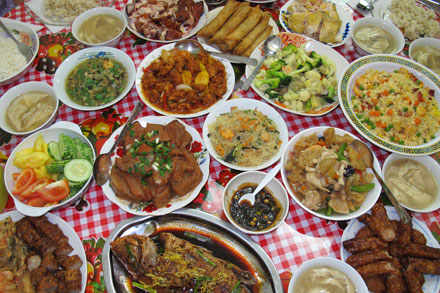