Without a doubt, the most fascinating island in the entire Andaman and Nicobar chain is the mysterious North Sentinel, an island off limits to both foreigners and Indians alike. The tribal North Sentinelese are considered by many to be the most isolated people on Earth. Most attempts by the Andaman tribal authorities to contact the North Sentinelese have been greeted with a very clear answer of angry arrows. Yikes! In response, the Indian government has stopped their attempts to contact the tribe. In 2006, Sentinelese archers killed two fisherman who were illegally fishing near the island. Clearly these people want to be left alone. 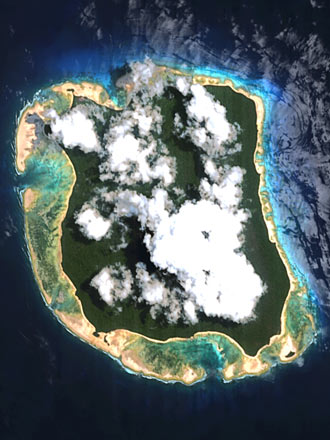 Very little is known about the North Sentinelese. No single word of their language has been recorded. Like the Onge, the Jarawa, and the Andamanese, the North Sentinelese are classified as negrito and look much more like Africans than Asians. They are believed to be some of the earliest peoples to have migrated across Asia. Virtually nothing is known or understood about their culture.

Since most of the tribal people in the Andamans are completely off-limits, a trip to the anthropological museum in Fort Blair is an absolute must. The tiny museum features a fascinating presentation of video footage of 60s and 70s expeditions to visit the Jarawa, Onge, Andamanese, Shompen and Nicobarese as well as – drumroll – early attempts to contact the North Sentinelese. If you don’t happen to be island hopping in the Andaman Sea, I’ve embedded a short Youtube video of this initial contact. Don’t miss this one!

Video in Turkish, but contains a closer cut of the footage

In 1981, the MV Primrose ran aground on the reefs off of North Sentinel Island. Luckily for the crew, rough seas kept the North Sentinelese from reaching the stranded ship before the crew could be airlifted to safety. Capt. Robert Fore, one of the two pilots in that rescue mission, contacted us with a link to his account of that rescue mission as well as some aerial photos of the rescue. Very cool piece of history. He also left a comment in the comment section below.