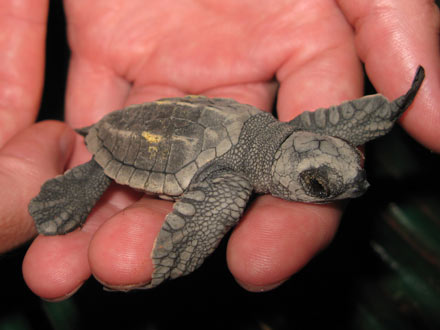 While on Havelock, Tony came back from diving one day with a you-won’t-believe-what-happened-to-me expression on his face. He recounted how he had missed a 12-foot manta ray gliding over him while he was looking at a turtle below, fully expecting my sympathy. But instead, I was like, “You saw a turtle?!”

I have every reason to be envious. The few times I have snorkeled, I haven’t had any luck spotting a turtle but, fortunately, my luck seems to be changing. Our first night here in North Andaman, sitting around the dinner table, Jean-Pierre, a French tourist, came running back from the beach and showed us a picture on his camera of a turtle laying eggs just a few hundred meters away. This was my cue.

We grabbed our flashlights and headed along the dark beach to the place he had described. But we were too late. No turtle in sight. As we continued searching the beach for other turtles, two Indian guys appeared and told us to turn off our flashlights, apparently afraid we would drive away the turtles. And instead of driving us away, they took us to the spot where the turtle had laid her eggs earlier. Then they started digging. 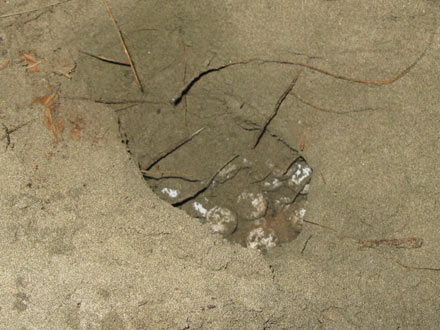 At first, we were confused and yelled, “What are you doing? Stop it!” But then they explained they worked for a governmental turtle watch project and were there to transfer the eggs to the hatchery, a fenced off area only a few feet away that would protect the eggs from dogs and other digging creatures.

After a few minutes they had filled a basket with 145(!) white, soft-shell eggs, and they weren’t small eggs. (My god, that turtle must have been completely hollow.) Then they buried them behind the fence and marked the spot with the current date and the predicted hatching date (52 – 58 days later). I was thrilled.

But the best was yet to come.

When the Indians reemerged from the hatching enclosure, they brought six tiny Ridley sea turtles that had hatched that evening and sat them down on the table in front of us. At first, I thought they were little plastic toys – they looked so fake. But I quickly noticed the “toys” were flapping and fluttering their flippers scraping their way across the bamboo table, nature’s pre-programmed escape instinct in action. We had a few minutes to hold the baby turtles and look at them closely before we all walked down to the beach and released them into the ocean. Yes, I finally got my sea turtle experience! 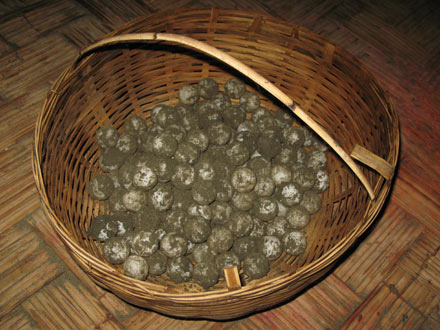