My Son – This Ain’t No Angkor Wat 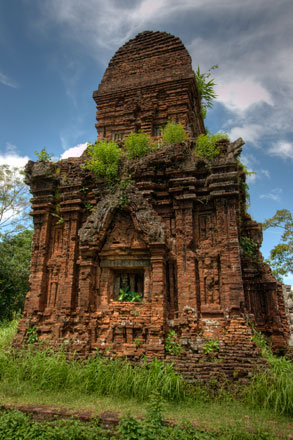 “Angkor Wat is much better,” the girl complained as she puffed on her cigarette and held her head, “God, I have such a hangover.” She took another puff and dropped her butt amid the ruins.

Sometimes, I really miss the days when travel was hard and the clueless rarely found their way past their front doors.

My Son, pronounced “me sun,” represents the largest surviving collection of Cham ruins in Vietnam. Yes, they in no way compare to Angkor Wat, the largest temple complex in the world, as few things do. But My Son, the best surviving example of Cham temple architecture, is unique and important. The Champa Kingdom was a Hindu Malayo-Polynesian kingdom that controlled central Vietnam for roughly a millenium. Their culture is more closely related to Hindu Java than the neighboring Khmer Empire. This extraordinarily important set of Hindu ruins was severly damaged by intentional American bombing during the war, and represents a serious cultural and historical loss. 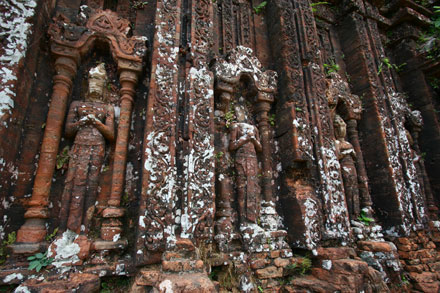 A loss that too few seem to care about as most visitors appeared to share this girl’s disappointment at the modest size of My Son. This is due, in large part, to marketing brochures and tourist sales people touting the site as Vietnam’s Angkor Wat, thus setting people’s expectations ridiculously high.

In reality, the site is small and can easily be explored in an hour (even less if you have a limited attention span). A trip here will be more meaningful to serious architecture enthusiasts rather than casual visitors. A good guide can help you appreciate the site with interesting facts such as the debate over the mysterious method used to bond the bricks together.

For those who do decide to give My Son a skip, keep a look out for Cham towers along the coast from Ho Chi Minh City to Hoi An. We saw several of the beautiful towers from the bus along the way. The Po Nagar site just north of Nha Trang is also easily visited by bike and provides a nice view over the river and the city beyond.

2 responses to “My Son – This Ain’t No Angkor Wat”