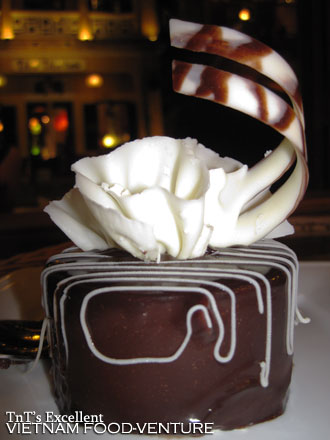 Baguettes, croissants, home-made country pâté, fine wines and a love for strong coffee, French colonists definitely left their mark on Vietnam. And while the Vietnamese fought long and hard for independence, they were more than willing to keep a few culinary memories of their colonial oppressors. Traditional French cuisine is widely available in Vietnam’s larger cities and high-end French-Vietnamese fusion restaurants seem to be popping up everywhere.

To be super blunt, it is hard for me to justify the high prices at these trendier restaurants when Vietnamese cuisine is some of the most delicious, well-priced food on the planet. But when we stopped in Hoi An’s Cargo Club Restaurant for an afternoon ice coffee, I happened to spot their phenomenal selection of desserts in the attached patisserie. Desserts are this super-cheapo’s version of cryptonite.

Shelf after shelf of eye-popping creations left me seriously considering whether I should move to Hoi An permanently. That chocolate mousse was calling – and it was even more delicious than it looks in the picture above. Now I would like to say that every dessert was equally delicious, but in reality, I have no idea. I could never get past the chocolate mousse. Night after night I intended to order something else, but each time I weakened and returned to the mousse. However, the New York Times calls the Cargo Patisserie “the best in southern Vietnam.” (Excuse me New York Times writers, but “best in southern Vietnam” suggests that there is something in northern Vietnam which is superior, and you have the gall not to include a link to that establishment.)

Even if you don’t have a chance to sample Cargo’s amazing chocolate mousse, delicious French-inspired desserts are available throughout the country. Mango mousse, banana flambe, Crêpe Suzette… just order up a nice coffee and take your pick. 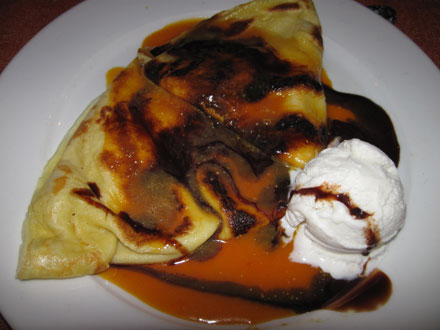