Momos in the Snow 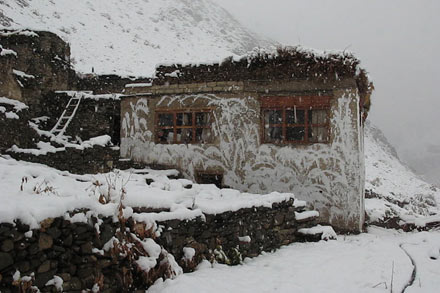 It’s hard to convey the reality of this trek. Pictures and videos will show the landscape, the wildlife, and the unique culture, but I’m sure the challenges of the trek will be lost in the beauty of the area. Yes, it’s spectacular – but it’s also quite tough going. Luckily, with the challenges come thrills hearkening back to a much simpler age.

Leaving Phuktal, we took an alternate route along the northern side of the beautiful Tsarap River via the tiny village of Cha. Locals had assured us the path was good enough for pack animals and that we should have no problems along the way. Yeah, right. The path lead up, up, up above the river to almost ridiculous heights.

For a week, we’ve been walking along one hair-raising path after another with plunging drop-offs; we’re not overly sensitive to deadly, plunging cliffs. But the route to Cha woke us up once again. For extended stretches, the trail was less than a foot wide with a sheer 500-1000 ft fall into the river.

In three areas, recent landslides covered the trail with steep slopes of scree raining down into the river gorge like a slow-moving stone waterfall. In the distance, we could see a storm moving in and we were afraid to get caught on the high paths in the rain, so we continued forward. Loaded down with our full backpacks, we awkwardly scrambled over the sliding scree slopes, moving quickly so we would not be carried over the ledge in the flow of moving pebbles.

Just as we made our way off the dangerous trail to Cha, the storm started to catch up with us. It was still early and we were hoping to continue walking, but the rain was steadily picking up and the temperature was plummeting. After a couple of hours slipping and sliding along the increasingly muddy paths, we saw an isolated house sitting in a lone barley field. The family immediately took us in and dropped two huge plates of dal and rice in front of us. Calories!!!

The family watched in perverted fascination as we shoveled the food down our throats. Clearly impressed by our hunger, the mother in the family suggested momos (Tibetan dumplings) for dinner. Our eyes filled with ravenous anticipation of the tasty treats.

The storm was picking up and the light rain became heavy snow. It was the first snow on the trek and anxiety began to well up inside. Were we going to be snowed in? A dozen worrying scenarios began to whirl around my mind like the snowflakes caught in the gusts of wind outside.

To distract myself, I watched the mother kneading momo dough while simultaneously preparing the potato filling. Yummmm. She rolled out the dough into small circles and folded in the potato mixture. I glanced outside at the snow-white trees and the vanishing barley field, suddenly wondering if being snowed into this house might be a stroke of good luck.

One response to “Momos in the Snow”